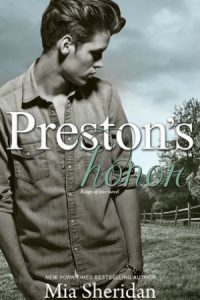 There were two brothers—identical twins—and though I loved them both, my soul belonged to only one.

Annalia Del Valle has loved Preston Sawyer all her life. The daughter of an impoverished migrant farmworker, she grew up as an outcast in what was no more than a tiny, cooped up shack in California’s Central Valley. But her heart found freedom in the land, in the wide-open spaces of Sawyer Farm, and in the boys who were her only friends.

Preston has yearned for Annalia since he was a boy. But a sense of honor kept him from pursuing her until he’s unable to hold back any longer and their worlds—and bodies—collide one hot summer night. A night that sets off a chain of events that will alter their lives forever.

Now Annalia is back in town after disappearing without a trace for six long months. Determined to reclaim her heart, her life, and the baby she left behind—the son who was created in a moment of lust and love and pent-up yearning.

Preston has survived grief, a ravaging drought, and the despair of heartache, but he’s not sure he can survive Annalia again. And he might be unwilling to try. Will pride and bitterness keep him from the one thing he’s always longed for?

How do you heal what is irreparably broken? How do you forgive that which is unforgivable? How do you discover that real honor comes not from circumstance, but from the place deep in our hearts where truth resides? And how do you move beyond the wounds of the past to discover that some loves are as solid as the ground beneath your feet, and as enduring as the earth itself?

THIS IS A STAND-ALONE SIGN OF LOVE NOVEL, INSPIRED BY GEMINI. New Adult Contemporary Romance: Due to strong language and sexual content, this book is not intended for readers under the age of 18.

Mia Sheridan is one of those authors that writes beautiful, heartbreaking stories. They seem simple, but for some reason they always stay with me for days. Preston’s Honor is just like the author’s other books; a sweet and painful story I can’t stop thinking about. I love Preston, Annalia and their story.

“What about you, Preston? Are you going to ask where I’ve been? Does it matter to you or do you hate me so much you don’t care at all?”

Annalia has grown up with just her mother, a Mexican immigrant who had a very hard and sad life. As a result, Annalia is a shy girl who keeps to herself and feels she doesn’t belong anywhere, a fact other children cruelly keep reminding her of. The Sawyer twins are a different story, although Preston and Cole are a bit older, they are kind to Annalia and see her as a friend. Annalia loves both boys, but while she sees Cole more as a big brother, for Preston she feels real love. Six months ago, a broken Annalia left Preston and their son Hudson behind, but now she’s back.

“I’d always loved him, I supposed. But in the last year, my love had turned… different. In the last year I’d begun noticing him in ways I hadn’t before. And I’d begun wondering what it would feel like if he kissed me, if he touched me, if he wanted me, too.”

Preston is a young, hardworking man who has a lot of responsibilities. The last years haven’t been kind to him, he has suffered great loss and all of his time goes into saving the family farm. A light point in his life is his son Hudson and Annalia, the girl he has loved for a very long time. When Annalia disappears without a trace, Preston is wrecked. He doesn’t understand why she left him and their baby son behind. Seeing Annalia again is hard for Preston, he wants to know why she’s back, and more importantly, why she left.

“Was she here to stay? Should I even consider trusting her again? Could I? How could I trust that she wasn’t going to be here one day and gone the next? My throat tightened. I couldn’t go through that again. I couldn’t.”

Annalia and Preston have known each other since childhood and secretly loved each other for just as long. Both Sawyer boys are attracted to Annalia and decide who can ‘have’ her. Cole ‘wins’ her, leaving Preston to bury his love for her. But true love can’t be escaped, and Preston and Annalia give into their feelings on a hot summer night. The aftermath of that night is hard on the couple, they have to overcome a huge loss and on top there’s a little baby boy. Life isn’t kind, and Annalia sees no other way then to disappear. When she comes back Preston is angry and upset, but soon they decide there might be a second chance, to make their love work.

My heart breaks for both Annalia and Preston. Preston has the weight of the world on his shoulders. He is devastated and running a farm is very hard and exhausting physical work. As a mother myself I know how hard the first months with a newborn are, it’s not the pink cloud people tell you about. Annalia’s start as a young mother is far less ideal; she is grieving as well, and nobody looks after her. I can understand all becomes too much for her, and that she has to do something.

Though Preston and Annalia love each other so much, they aren’t very good at communicating. I feel the whole separation could have been prevented if they just talked about their fears and dreams. But that wasn’t in their nature; Annalia was too shy, and Preston too much of an introvert. I love the epilogue, to see the couple in a healthy, loving relationship.

“It was her words, my own deep understanding of exactly what had kept us divided—separate—for so long; it was the feel of the moment, as if we’d suddenly come full circle and it was important. It was the sudden stillness I felt inside. The rightness. “I love you.”

Although I wanted to shake some sense into Preston and Annalia from time to time, I love their heartbreaking story. I give Preston’s Honor 5 stars.