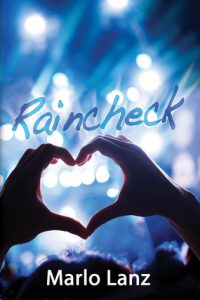 Ty Benson is tall, dark, delicious – and done with women. As the singer for the iconic rock band Raincheck, Ty is sick of women chasing after him. He’s sworn off relationships, enjoying the simplicity that celibacy brings. Until he meets Liv Madison. She’s completely – and maddeningly - uninterested in him. And it’s seriously turning him on. Stuck together on Raincheck’s Summer Tour, Ty is trying to stay away from her. But it’s getting harder every day.

Liv Madison just wants to work on her Master’s thesis and have some fun this summer. Which is the exact reason she’s tagging along as her best friend Gabe performs on Raincheck’s tour. Ty Benson, however, seems to have other plans for her. As annoying as he is gorgeous, Ty just won’t leave her alone. And it’s affecting her relationship with Gabe - in a completely unexpected way.

Can Ty convince Liv to give him a chance? Or will her friendship with Gabe turn into so much more?

Rockstars, young people on the road, mis – communications; all ingredients for a good story. Raincheck by Marlo Lanz has all those things, and more. From what I can see, this is the author’s debut book, and I’m pleasantly surprised; I’ve enjoyed reading the story of Ty and Liv.

“I hated the way Ty made me feel. It was like a whirlwind of emotions when we were together. He could drive me from furious to astonished in mere seconds. And it was maddening.”

Liv is a serious student who’s working on her master thesis. As a summer vacation she decides to join her dear friend and roommate Gabe while he tours with Raincheck, one of the hottest bands of the moment. To protect her from ‘wild rockstars’, she and Gabe pretend to be in a committed relationship, which isn’t that hard since they know each other so well. Getting to know the real Ty, not the version portrait by the tabloids, makes Liv question their decision.

After the fallout with his ex-fiancé Ty isn’t interested in women anymore. Well, he had his wild period after the breakup, but now he’s trying to be good, no more booze, no more hookups with too eager groupies. Just enjoying his music and touring with his band. The ‘girlfriend’ from a guy of one of the supporting acts makes him feel things he shouldn’t feel, but he can’t stay away from her.

“She wanted me to kiss her. I could feel it. I bit the inside of my lip, warring inside, knowing this was wrong. Knowing that I should walk away before things went too far.”

Raincheck is a rockstar romance, but beside the music also Liv’s study plays an important role. The story is told in a double POV, and given what happens throughout the book I’m glad the author has written it this way. Raincheck has its funny moments, but there’s enough angst and moments you want to shake some sense into the characters. Are there clichés? Yes, there are, but since this is a debut book and I like the author’s writing-style, I don’t mind that much.

Some of Liv and Ty’s actions made me shake my head, but I can ‘forgive’ them for some of those. They meet under not so normal circumstances, which makes it hard to get to know each other. Add to that Liv’s fake relationship with her best friend, a mean ex-fiancé and miscommunication and you have a disaster in the making. Peeps, please… Talk to each other, don’t assume things, don’t listen to meddling people! But then again, Liv and Ty are young, and young people make mistakes (and hopefully learn from them). I love Ty and Liv as a couple, they just make sense.

“There was something between us right from the start. Something that I’ve never felt with anyone before. Liv, you have my heart and my love. Always.” “You’re my other half.” 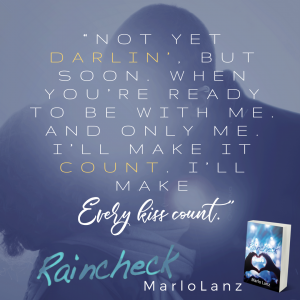 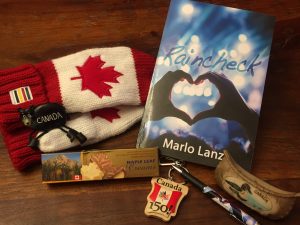