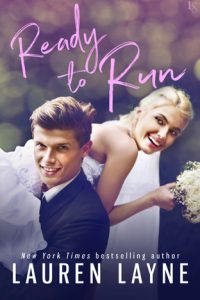 The Bachelor meets The Runaway Bride in this addictive romance novel about a reality TV producer falling for her would-be star: a Montana heartthrob who wants nothing to do with the show.

Jordan Carpenter thinks she’s finally found the perfect candidate for Jilted, a new dating show about runaway grooms: Luke Elliott, a playboy firefighter who’s left not one but three brides at the altar. The only problem? Luke refuses to answer Jordan’s emails or return her calls. Which is how she ends up on a flight to Montana to recruit him in person. It’s not Manhattan but at least the locals in Lucky Hollow seem friendly . . . except for Luke, who’s more intense—and way hotter—than the slick womanizer Jordan expected.

Eager to put the past behind him, Luke has zero intention of following this gorgeous, fast-talking city girl back to New York. But before he can send her packing, Jordan’s everywhere: at his favorite bar, the county fair, even his exes’ book club. Annoyingly, everyone in Lucky Hollow seems to like her—and deep down, she’s starting to grow on him too. But the more he fights her constant pestering, the more Luke finds himself wishing that Jordan would kick off her high heels and make herself comfortable in his arms.

Prejudices and not everything is what it seems to be. Ready to Run by Lauren Layne is about two people from two different worlds, but are they that different? The beginning of the book felt a bit ‘crowded’ to me, but I ended the book with a big smile, I’ve enjoyed it very much.

“Hey, Country Boy,” she called after him. He stopped and turned, his large frame illuminated by the twilight. She smiled, then grinned outright when she saw his eyes narrow. “This city girl’s not going anywhere,” she said with a wink.”

TV producer Jordan is looking for the perfect candidate for a new TV show, Jilted. The tv show where runaway grooms are introduced to a group of suitable women to find the One. On paper, Luke is perfect for the show with three canceled weddings, but he doesn’t want his story on national tv. In a last attempt to lure him in, Jordan travels to Lucky Hollow to convince the man in person, but she’s in no luck. Although they’re attracted to each other, it takes some time before Jordan and Luke warm up to each other. With the help of some meddling townspeople sparks start to fly, and it’s not surprising they end up together.

“He was supposed to be irresponsible and a little reckless—with his life, his choices . . . with other people’s emotions. But based on her first impressions of the man? She’d never been so wrong.”

Ready to Run is the first book in the new ‘I Do, I Don’t Series’ and is set in Lucky Hollow, a small town. Like many other small-town books, the story comes with a friendly town full of colorful characters and gatherings who all add to the story. The book is funny, but it also has its serious moments, I really like the mix.

To be honest, after the first chapters, I was not sure about this book. Many characters were introduced, making it a bit too busy for me. But as soon as everything collapsed and the storyline was picked up, I began to enjoy the story. Luke and Jordan are both not who they appear to be; a heartbreaker and a city girl. They are realistic people who both have lived lives and know what they want. I love them together, and I love how they work through their issues.

“Jordan wiggled closer, the chill from the rain making her shiver. Or maybe that was the anticipation. “What about in the future?” His smile was equal parts tender and mischievous. “Try me.”

Ready to Run is my first book by Lauren Layne, but it certainly won’t be my last. I give the story of Jordan and Luke 4 stars.

Tags I do I don't, Lauren Layne, Ready to Run, Review, Romance