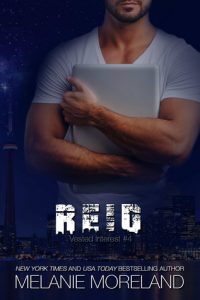 A child, abandoned and unloved.

A teen, adrift and disregarded, using his superior tech skills for the wrong intentions.

A young adult, his future overshadowed by his prison record, his life an endless loop of loneliness.

Until he is given a second chance and a new life emerges.

A career he once thought he could only dream of, surrounded by people who show him that family and home aren’t simply words.

And a girl who shows him the greatest, most complex code he could ever write.

Most book heroes we read about are CEO’s, run their own security firm or are famous for their music and wild lifestyle. But every now and then, there’s a book hero with a more normal job. And that’s the case with Reid. His background isn’t the easiest one, but nowadays he’s your friendly IT-geek (and okay, I do have a soft spot for him since my hubby is an IT-geek as well). I love Reid, Becca and their story.

“I would never know how I had existed before kissing Becca. Going forward, I only knew it was going to happen daily, multiple times. She was pure opium, and I was hooked.”

Reid is a happy guy now; he works with people he considers family, and he can do what he loves for a living. His life hasn’t always been this fun. Growing up in the system has left its marks on him, and he did some pretty stupid things. But now all is fine. When Reid meets Becca, he just doesn’t know what to do. Yes, he’s attracted to her and wants her, but at the same time he turns into a mess when she’s around. Sensible IT guy v. Falling in love: 0 – 1.

“He was hot and cold. Some days, I was certain he was as interested in me as I was in him, and others, I was sure I had only imagined the spark between us.”

Knowing geeky Reid from the previous books in the series, I was curious for his story. Knowing all about him now, I hate the way he grew up, but I love the man he has become. Yes, he has made mistakes in the past, but he owns them and doesn’t make excuses. The way Reid acts around Becca is hilarious, sometimes I want to shake some sense into him. For a smart guy he has his social awkward moments, and I so understand Becca’s confusion. The two of them are a sweet couple, I love them for each other.

Reid is already the fourth book in the ‘Invested Interest Series’ and brings the reader back to the world of BAM. Of course, this is Reid’s story, but the other BAM guys and their ladies show up a lot. The story is told mostly from Reid’s POV. I’m glad I know more about Reid know, but I feel like Becca deserves a few more chapters of her own. Like a true Melanie Moreland book, Reid has the sweetest epilogue, it just makes me swoon.

“It felt right. My entire life finally felt right. I kissed her. “I love you, Becca Holden.” 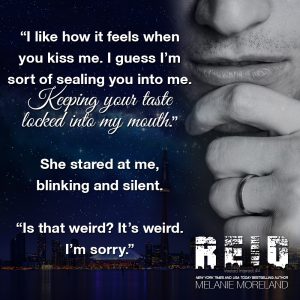