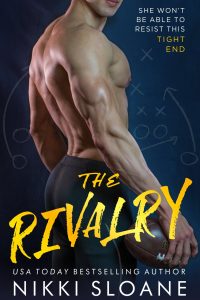 This tight end is at the top of his game.

He’s good with his hands, even better with his sexy mouth, and the best at making me forget my own name. His—ahem—stats are perfect.

But I can’t fall for him.

He might be everything I want, all rolled into a glorious package of gridiron god, but there’s one teeny-tiny problem. The vile, loathsome team I’ve spent my entire life hating—my beloved school’s arch-rival?

This guy is their star player.

Falling for the guy who plays for the team you absolutely hate? Can it work? The Rivalry is Nikki Sloane’s latest book, and tells the story of Kayla and Jay, two huge sports enthusiasts. I love their sweet, sexy story.

“We need to get you past this rivalry thing.” “Not in a million years.” Her eyes widened as I made my approach, cutting the space between us to nothing. “What are you doing?” “I like a challenge.”

Kayla is a born Ohio State’s fan. She loves sports and the football team, and as head cheerleader she’s part of every game. Kayla hasn’t got the time for boyfriends, and beside that, she hasn’t felt real butterflies for any guy she has ever met. Enter Jay, a friend of a friend she meets at a party. He makes her feel a whole lot, until she finds out he’s the tight end that has cost her team last year’s championship.

Jay is the current star of the Michigan State’s football team, he’s good and has big chances making it into the pro’s. During his younger years he was a bit of a playboy, but nowadays Jay stays clear of chicks (and other people) who only want the star player. Kayla is different from other girls he met, he loves the challenge she presents. Yes, she cheers for the rival team, but he doesn’t mind at all.

“His mouth found mine, and his kiss was urgent. Needy. It was loaded with lust, and I was desperate to give in to it. “You were right,” I said, trying not to pant it out. “Your kiss needs to come with a warning.”

The Rivalry is a sport romances, told in a double POV. Normally I read about older people, but I can’t pass a college story by one of my favorite authors. It’s a sweet, funny story without angst or the usual college characters (the slut, the nerdy friend, the gay friend, etc), but there’s enough going on. Of course, there’s a wee bit of drama, but it’s all a logic consequence of the storyline, nothing over-the-top or eyeroll-worthy.

Knowing Nikki Sloane for her erotic stories, I didn’t know what the expect from The Rivalry. The story has some pretty steamy moments, but it’s not like the ‘Blindfold Club Series’ or the Sordid books. But I don’t mind at all, I love it when an author tries something new. I’m not really a sports fan, so I thought Kayla was so over-the-top with her reaction towards Jay. But after meeting her family, how could she have been any different. Kayla is a feisty sweetheart with her heart in the right place. Yes, she doesn’t know what she wants, but who does in their early 20’s? I love how Jay handles Kayla’s ‘issues’ of them being together, he wants the girl and proves they’re right for each other.

“I felt like I was floating. No, wait. When he lifted me, I wrapped my legs and arms around him, clinging to his shoulder pads as his powerful kiss slayed me. It was over too soon, but he pulled back just enough so I could stare into his deep eyes. “I love you.”

I love Kayla, Jay and their story, I give The Rivalry 4.5 stars. 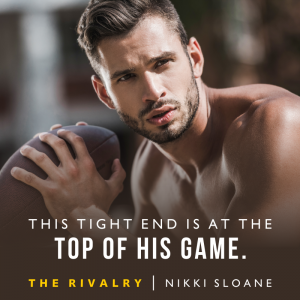