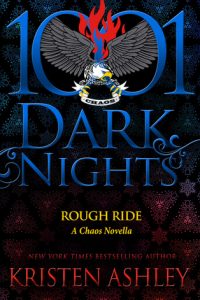 Rosalie Holloway put it all on the line for the Chaos Motorcycle Club.

Informing to Chaos on their rival club—her man’s club, Bounty—Rosalie knows the stakes. And she pays them when her man, who she was hoping to scare straight, finds out she’s betrayed him and he delivers her to his brothers to mete out their form of justice.

But really, Rosie has long been denying that, as she drifted away from her Bounty, she’s been falling in love with Everett “Snapper” Kavanagh, a Chaos brother. Snap is the biker-boy-next door with the snowy blue eyes, quiet confidence and sweet disposition who was supposed to keep her safe…and fell down on that job.

For Snapper, it’s always been Rosalie, from the first time he saw her at the Chaos Compound. He’s just been waiting for a clear shot. But he didn’t want to get it after his Rosie was left bleeding, beat down and broken by Bounty on a cement warehouse floor.

With Rosalie a casualty of an ongoing war, Snapper has to guide her to trust him, take a shot with him, build a them…

And fold his woman firmly in the family that is Chaos.

**Every 1001 Dark Nights novella is a standalone story. For new readers, it’s an introduction to an author’s world. And for fans, it’s a bonus book in the author’s series. We hope you'll enjoy each one as much as we do.**

One of my most re-read books by Kristen Ashley is Own The Wind, the first book in the ‘Chaos Series’. It tells the story of Tabby and Shy, and while I love them together, I hated Shy for the way he treated Rosalie. Although Rosalie played a small part, she made a big impression on me and I always kept wondering about her. With Rough Ride we finally get her (and Snapper’s) story; Rosalie and Snapper are a true KA couple.

“I’d never seen eyes like Snapper’s. You would think that snow would put you in a deep freeze but he’d never, not once, not even for an instant, given me anything cold. He was all warm for me.”

Rosalie is a born biker-babe. Her father was a good biker, a lone rider who loved to ride and who stayed far away from the criminal clubs. After Shy dumped her years ago, she found new love with another biker, and things were good until he started to hang out with the wrong crowd. When Rosalie pays the price for her boyfriend’s criminal activities, Snapper and the other Chaos men come for her rescue, getting her back into the Chaos-fold. Snapper has always been special to Rosalie, and with him being so close she can’t deny her feelings.

Snapper has always been into Rosalie, but first she was Shy’s and then she happily moved on with a biker from another club. When Rosalie gets caught up in club-shit and is brutally beaten, he steps in, claiming her as his. Snapper knows she’s not ready yet, but he has to make her understand his feelings for her.

“I been along for this ride with you, Rosie. Do you think I missed that?” “No, it’s just—” “I’m totally fuckin’ in love with you.” I leaned back and stared, a flare happening around my heart that started to spread throughout my chest cavity. “Gone, babe. Gone.”

Rosalie and Snapper are a true KA couple; she a sassy sweet woman, he an Alpha guy (and in this case also a badass biker) who knows what he wants. I love Rosalie, she’s been through hell, but that doesn’t stop her from being herself. She knows where it went wrong in her previous relations and wants to do better for herself, and Snapper. Snapper, Snapper, Snapper… Dude, take it easy! I know you want Rosalie, but she’s not going anywhere. I get that you’re a badass Alpha biker, but tone it down a bit… I would have run straight into the other direction, you’re lucky Rosalie is much more understanding.

Like the last books in ‘the Chaos Series’, Rough Ride is mainly a sweet story (with rough edges); all about finding real love, friendship and the Chaos-family. Sometimes I feel it’s almost too sweet, that there’s too much friendliness. But after the epilogue I can’t shake the feeling that all these positive feelings are a build-up to something truly evil; a dark storm threating the Chaos men and their loved ones.

“When it was time, we’d shut down the house, together, and move up the stairs, together, and find our way to the bed… Together. He hadn’t lied. I was his world.” 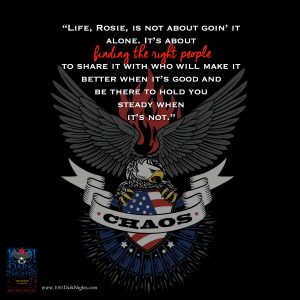 He spit on me.

I felt it land on the side of my chin and slide down.

I didn’t move to wipe it away.

Lying on my side, curled into a ball, the pain screamed through me. All of it—and there was a lot of it—demanding attention, I couldn’t concentrate, couldn’t think, couldn’t move in case it got worse. I couldn’t do anything but lie there and pray that it was over.

He bent over me, grabbed my hair, yanked it back, and I felt his hot breath hit my face.

“See if he wants you now, you stupid bitch,” he hissed.

He let my hair go and I felt him retreat, but he still wasn’t done.

He kicked me so hard with his foot in its heavy motorcycle boot, my body slid across the cement.

I was too far gone even to grunt.

I felt something bounce off my hip, clatter to the floor, and then his voice came back, this time from further away.

I heard boots on cement, more than just his, his Bounty brothers in the club. I sustained a couple more kicks as they passed. One of them grabbed the underside of my jaw and shoved my head back into the cement, also spitting, his hitting my neck.

And then they were gone.

I lay there, my focus on breathing and continuing to do it even though each breath was not only an effort but an agony. The fear I’d felt early when he took me, how he’d taken me, the way he’d handled me and I knew he’d figured it out, had dissipated as pain took its place. Now, the fear was returning that they’d come back and dish out more.