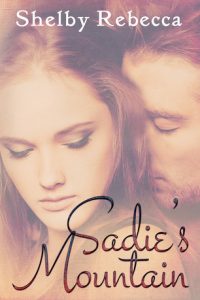 One fateful night, Sadie Sparks' young life was changed forever. Just as she was discovering love with her best friend, Dillon McGraw, someone else was plotting to take her for his own. Faced with choosing between the fear and threats and a safer life, Sadie leaves her West Virginia home for good.

A decade later, Sadie returns to Appalachia to care for her ailing mother, but stays to fight for the mountain she loves. Her struggles to protect it from being ravaged for coal put her in greater danger than she ever imagined — and back in the arms of the man she never stopped loving. But the man responsible for changing her life so many years ago is determined to keep her under his control. When she decides to break free, will Sadie and Dillon's bond be strong enough to endure the truth about his identity?

Sadie is on her way home, a home she has left behind ten years ago. Sadie grew up in a religious family, her father being the strict pastor of their congregation. From a very young age Sadie has had a special bond with Dillon, the boy next door. He’s a bit older, but the two of them are inseparable and everybody knows they will end up together. But when Sadie is 15, she barely survives a horrific attack and everything changes. She no longer can life at home and leaves everybody – including Dillon – behind. Now Sadie is back, to say goodbye to her dying mother. She knows she must stay away from Dillon, but that’s impossible.

“I miss him but he’s right here in my arms. It doesn’t feel like it in my heart because it’s throbbing. After a time, my breathing starts to calm, no doubt by pacing mine to his, and I can put my legs down again. I keep the side of my face on his shoulder and take in his scent. I’ve missed this. It’s like a scent created by God just for me and me alone.”

Dillon is still living in his childhood town. He left for his education, but he went back, and is now working in the area. Sadie is his childhood love, the girl he promised to marry when he was almost nine years old. And although he has lived a life while Sadie was away, his heart and dreams have always belonged to her. Dillon has always felt guilty over what had happened to Sadie, even though he doesn’t even know the full extent of what occurred that night. When Dillon sees Sadie for the first time in ten years, and her reaction to him, he knows they might have a chance.

“I am in love with you, Sadie,” he states, his voice as clear as a blue sky. “That will never change, ever. I’m in love with my best friend and there’s nothing that will ever change that. We grew up together. We shared everything. You know me better than anyone ever has or ever will.”

As children Sadie and Dillon where very close; they loved each other long before they even understood the concept of love. After Sadie’s ordeal, she cuts out everybody from her life and moves away to life with her aunt. And now she’s back; grown up, still damaged from the attack and still in love with Dillon. A man she thinks she can’t have because her attacker made her understood very clearly, she and Dillon can’t be together. Sadie and Dillon start spending time together, and slowly rekindle their friendship. It’s obvious they still love each other. When all is out is the open, the couple finally has a chance at their so much deserved fairytale ending.

My heart broke for Sadie. What happened to her was horrific to read by itself, but the reaction of her own father made is so much worse. Sadie was such a sweet and sheltered young girl, she didn’t do anything to provoke both men, both monsters in their own way. I love how Dillon is with Sadie, despite he hasn’t seen or heard from her in ten years, she’s still the woman he wants to build a future with. Both Sadie and Dillon are quite religious, even after what happened. Normally it irks me a bit, but in this case, it doesn’t. Sadie’s Mountain doesn’t contain explicit sex scenes like other romantic stories, and to my surprise I didn’t even miss them. Sadie, Dillon and their story are enough.

I love Sadie’s Mountain, I give the story of Sadie and Dillon 4.5 stars.