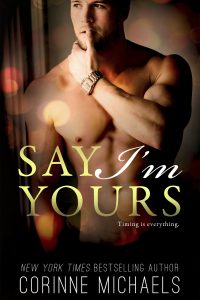 I spent twenty years waiting for Trent Hennington to open his eyes and see me. But it was all for nothing. He chose to keep himself guarded and let me walk away, proving that my time and efforts were wasted.

It’s time to move on.

A single dance sets my new reality into motion, and I welcomeI it. After all, Cooper Townsend is perfect. He’s kind, sexy, and attentive–everything a girl could want.

I thought I got it right this time.

That my heart could mend, and I would be happy.

Apparently, some things really are just too hard to walk away from.

Say I’m Yours by Corinne Michaels is a heartbreaking story about not giving up on your own dreams. Grace and Trent have been together for a long time, but Grace wants more than Trent is willing to give her. Choosing her own happiness breaks Grace’s heart, but in the end she’s living her dream.

“I’ve given you everything I could while you haven’t given me anything but scraps. It’s wrecked me, and I can’t let you break me again. I love you. I’ve always loved you. You’re the only man I’ve ever pictured a life with.”

After twenty years, Grace is done. Done with waiting for Trent to tell her he loves her and to want the same things out of life she wants. At 36 Grace is more than ready to live with her man in the same house, to get married and to start her own family. But the man she loves with all her heart doesn’t want those things. Knowing Trent won’t change, ever, Grace breaks off their ‘relationship’, and this time for good. But just when she hesitatingly agrees to a date with Cooper – a man she has known her whole life – Trent comes back, claiming he’s a changed man.

“Tell me you love me,” I request. “Tell me if you want me to believe it.” He shakes his head, brushing his lips against mine. “You don’t need the words, sweetheart. You need to feel it.” He’s wrong. I do need them.”

Trent is the hardworking sheriff of the small town he and his family lives in. His family runs the family farm, but Trent picked a different career and likes his work. For the past twenty years, he and Grace have a casual relationship, and for reasons only known to Trent it never went further to something more serious. But the arrangement suits him, he does as he pleases and doesn’t owe Grace any explanations (or at least he thinks he doesn’t). However, he has always been faithful to his girl and does have feelings for her, he just doesn’t tell her. When Grace ends it between them for the umpteenth time he expects to have her back in a few weeks. Finding out she’s going on a date with his friend Cooper flabbergasts him. Trent finally realizes he might loses her for good.

“Hearing it come from his mouth is too much. So long I’ve hoped that he did love me. But love isn’t a weapon to be wielded at another. Love doesn’t wound the other person, and right now, I’m in pain.”

For the past twenty years Grace and Trent have been ‘together’, but Grace is ready for more; marriage and her own family. Trent has proven over and over again he won’t give her that so Grace does the hardest thing in her life; walking away from the man she so deeply loves. Dating Cooper is sweet, but also weird. She knows him and his family so well, and Trent sudden change of heart doesn’t make it easy for her. Choosing between the two men seems impossible, but in her heart Grace already has the answer.

My heart breaks for Grace, I feel so sorry for her. She didn’t ask Trent for outrageous things, all she wanted was to build a normal, happy life with him. I felt her hurt when she told Trent it was over for real this time, and like her I was stunned when he did his 180. I know I’m in the minority, but I think Trent is a douche. Yes, in the story told in this book he’s the standup guy who realizes his mistake and fights for his woman. But he and Grace also have a twenty-year history. And during those years he wasn’t always that standup guy. He hurt her time and time again by refusing her into his heart, by making her believe she wasn’t loved. And a few lovely words and romantic promises doesn’t make it okay in my book right away. But I believe Trent is serious with Grace this time, and that he doesn’t just say the words to win her back.

I love Say I’m Yours, but because of my issues with the Hero I give this story 4 stars. 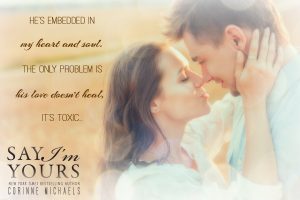