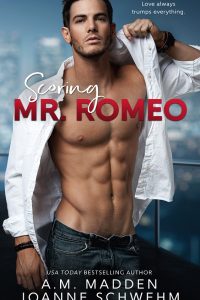 Falling in love was the furthest thing from my mind. I'm a single mother raising a strong little boy, and he is my one and only priority.

The universe felt otherwise, sending me--actually, my son's soccer ball--hurdling toward a stunningly handsome, perfect man, who said all the right things. He made it hard to ignore how much I missed romance.

In the past, when I met a man, they ran as soon as they heard I was a widow with a child. Not this guy. No, he fell in love with my son, and in turn my son fell in love with him. But, it was hard to believe he felt the same about me. My job was to be the strong one--to protect our hearts from sweet dreams that never lasted.

Women told me I was a master of romance. They were right. I knew how to sweep a woman off her feet, to make her feel special, and good in all the right places. I wasn't a saint. I've had my share of one-night stands. They served their purpose, giving me a steady diet of romance without the hassle of commitment.

Then one day at the park, a soccer ball came careening toward my head, and my life changed in an instant. I never imagined that true love would come in the form of a five-year-old little boy. And then I got to know his mother: She was strong, independent, drop-dead gorgeous, and someone I desired - I just needed to prove it to her.

She called me Mr. Romeo, and that was fine with me.

Stories about single parents, I love them. I love to see how the parent finds new love, but also how the partner is with the kid(s). Scoring Mr. Romeo tells the story of single mom Sabrina and Luca, and cute Mikey. I love the three of them together!

“His overall presence just made me feel safe. Why that would be something I felt when I barely knew him, I truly had no idea. One thing I knew for sure, I liked him.”

Sabrina is a single mom to her young son Mikey, and isn’t looking for a new man in her life. She’s still dealing with the aftermath of her husband’s sudden death, and feels it’s too soon for her and Mikey to move on. Luca is your typical playboy; he’s serious about his work and friends, but not so much when it comes to woman. When Sabrina and Luca meet, there’s an instant attraction, but they try to hide behind Mikey. Sabrina thinks she and Mikey don’t need a guy in their lives, and Luca pretends he only interacts with Sabrina because she has such a cool kid. But, this is a romantic story, so you know what’s going to happen…

Scoring Mr. Romeo is my first book by author-duo A.M. Madden and Joanne Schwehm and I was pleasantly surprised. I like how they build the story, and how the characters are written. The story is told from a dual POV, so you know what both Sabrina and Luca are thinking, and why they react a certain way. Scoring Mr. Romeo is the third book in the ‘Mr. Wrong Series’, but I didn’t feel like I was missing background information. However, I’m curious for these books now…

Sabrina is a good mom to her kid, and what she has been through was horrible. I so get her hesitation towards Luca, to give into her feelings, she has been burned badly. Luca is a great guy who’s surprised about his reaction towards Sabrina and Mikey. Although he hasn’t been serious about a woman before, he quickly realizes she and her son are important to him. Scoring Mr. Romeo is a sweet book, there’s no added drama or over-the-top situations, just two people trying to make it work.

Only an inch separated our mouths, but the cool air that replaced her warm lips had me going back for more. Wanting to feel them again, the second time I pressed harder. She parted just enough to convey she also wanted more.

My conscience nagged, forcing me to again break the connection and end the temptation. Her breath hitched when I added more distance, as if I removed her source of oxygen.

“I better go,” I whispered. The uncertainty in her eyes killed me. “Sabrina, I don’t want to… I need to.”