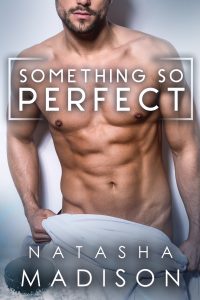 Matthew
Drafted first round pick when I was seventeen, playing first line at eighteen, branded NHL’s bad boy at nineteen. At twenty-three I was cut from the team and living back home with my parents. A knock on the door brought an opportunity I couldn’t turn down. All I had to do was prove I learned from my mistakes, so no way would I fall for a chick with a pouty mouth even if I wanted to spend all day devouring it.

Karrie
When my father gave me a job, I had no idea it would be to babysit some washed up NHL player. He wanted me to be his chaperone, his overpaid babysitter. I thought it was a joke. Then I met him, Matthew Grant. I wasn’t prepared for this particular bad boy. He’s not only hot but he’s arrogant and kinda sweet in a ‘you make me crazy’ kind of way.
Basically now that he’s finished screwing up his life, he’s decided to turn mine upside down.

She’s the first thing I’ve ever wanted more than hockey.

He’s the guy I know I should stay away from.

But what if this thing that started out so wrong turns into something so perfect?

Boys don’t stay boys, they grow up (sort of) … Something So Perfect is Natasha Madison’s latest book, and tells the story of Matthew and Karrie. We’ve met Matthew as a cool teenager in the author’s debut book Something So Right, but now he has his own story. To be honest, I’m not sure I like grown-up Matthew. He has his moments where I like him, but sometimes he takes things too far, way too far. I wish it was different, that I loved Matthew’s story as much as his mom’s story, but it is what it is.

“I turn to her, which is a mistake because I want to yank her over to me and kiss her. I want to make her squirm on my lap, but most of all I want to see what she looks like when she smiles.”

Matthew had it all; drafted at 17, a great sports career in the making, and lots of parties and puck-bunnies. He enjoyed himself and didn’t think of the possible consequences. But not everybody was happy with his antics, and now he’s 25 and starting over. His new hockey team is willing to give him a chance, but they don’t trust him enough to be without a ‘baby-sitter’ to keep him out of trouble. Too bad said baby-sitter is one of the hottest girls Matthew has ever seen.

Karrie has just finished her studies and is going to work for her father’s company. She might be the daughter of the boss, but that doesn’t mean she gets to start at a high-level position. Instead, they have something entirely different in mind for her; keeping NHL’s bad boy and latest acquisition out of trouble. Karrie is a smart girl, but thinking straight with hot Matthew around?

“It’s starting to become perfectly clear why I want to make a good impression. I like him, more than I want to kill him. This could be a problem.”

The moment Karrie and Matthew see each other they’re instantly attracted to each other. Finding out what Karrie’s job will be – baby-sitting Matthew – only makes it more intense. Matthew knows his reaction to Karrie is a bit extreme, but he goes along with it, wanting a committed relation like his mom and step-dad have. Karrie is a bit shocked by some of Matthew’s words and actions, but her feelings for him overrule any questions she has. Matthew and Karrie are insta-lust, insta-love, insta-everything.

As I’ve already said, I’m not sure if I like Matthew. He has his sweet moments and I love the bond he has with Cooper, his step-dad. But some of the things he does and says? If my hubby would have said and done them to me in the early days of our relationship, I probably would have run away as fast as I could, saving myself from an uncontrollable caveman. But this is fiction, and people who love stories about way over-the-top Alpha men probably won’t mind. I know the story is about Matthew, Karrie and their sexy road to their Happily Ever After, but small details make (or break) a story for me. And some of the little facts mentioned throughout the book felt a little too weird to me.

“Hold onto it, forever. “You’re my perfect,” he says to me. I smile at him, kissing his lips. “Something so perfect.”

I wish I loved Something So Perfect as much as Something So Right, but due to my issues I have to give Matthew and Karrie’s story 3 stars. 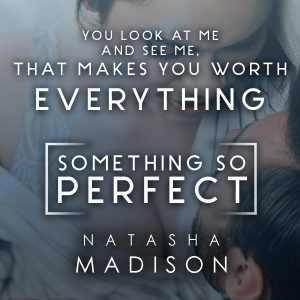