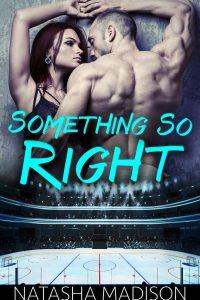 The moment everything changed didn’t happen in that cliché rockets-red-glare kind of way, it happened in the form of a waking nightmare. I caught my husband, my high-school sweetheart, the father of my children, balls deep in a sordid affair.
That was when I gave up on men and love.
I didn’t count on the NHL’s golden boy, the beautiful, arrogant Cooper Stone turning my life and my hockey rink upside down.

My kids are why I wake up in the morning.

Hockey is what Cooper breathes for.

One of the things I like about reviewing books is discovering new authors. Some debut authors are good, some need some practice, but I like reading their stories. Natasha Madison is such an author. Something So Right is her very first book, and she surprised me in a very good way. I love this book and I might have reread it a few times already.

“Instead of giving me lip, like he normally did, he would smirk at me or wink at me. At times it made my stomach flutter. But then at times I wanted to take his hockey stick and jab his eyes out.”

Parker has sworn off men and love. After she has caught her husband with another woman she has thrown herself at her work and taking care of her children, Matthew and Allison. Parker knows her marriage with her husband had its faults, but she was willing to work for it, and doesn’t understand he didn’t fight for them. For the shake of the children she tries to keep the communication civil, and hides her sadness. Training Cooper at her ice hockey rinks and spending time with him reawakens all sorts of feelings in Parker, feelings she hasn’t had in a long time.

“He leaned down and slowly like a whisp kissed my lips. He let me go, unlocking the door, and turned around right before walking out. The lights from the hallway shadowed him. “Babe, we just started.”

Cooper is an ice hockey player at the top of his game. When he realizes the relationship with his girlfriend of five years isn’t serious and isn’t going anywhere, he breaks things off. Not having had a normal family life – not even as a young kid – Cooper longs for something more; something lasting and real. Meeting his rehab trainer Parker due to an injury shakes him up, he knows he wants her, all of her.

“I want to just sit with her in my arms. I want to smell her. It’s weird how before I didn’t have the need to always think of someone else besides myself, and now all I think about is her before me.”

After a somewhat hostile start, Cooper and Parker get along well, on the skate rinks and in normal life. It doesn’t take long before sparks are flying, and the couple can’t keep their hands off each other. Both Parker and Cooper are adults with a past, a past that has shaped them and has taught them important life lessons. Cooper is looking for a good woman and normalcy and the warm embrace of family life. Parker thought she had her forever with her ex-husband, until he threw away their family. She can’t believe a younger, successful man like Cooper is attracted to her, and wants to be with her and her children. Of course, since this being a romance book the couple has a few bumps, but their Happily Ever After is a given fact.

As already said, Something So Right is Natasha Madison’s first book and for a first time author she has delivered a great story. I love the main couple, Parker and Cooper, and the way Cooper is with Parker’s children. I like the author’s writing style, her characters speak and deal with situations in a realistic way, and are not over-the-top. Some will say certain characters are too much, but hey, this is fiction! One tiny comment, the pace in some of parts of the story was a bit too fast, but this being the author’s first book, I don’t mind.

“I want to be there every single step of the way. Holding your hand. Wiping your tears, hearing your laughter, cringing when you yell to put the garbage out.” She laughs, her smile lighting up her eyes.”

I love Something So Right! I can’t wait for future books by Natasha Madison. I give the story of Parker and Cooper 4.5 stars.

~~ Something So Right was provided in exchange for an honest review ~~ 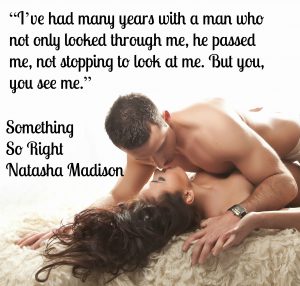