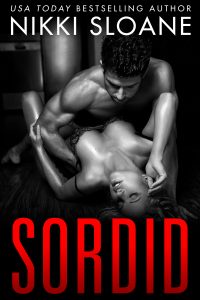 It took me years to find the courage to speak to Luka. He seemed exactly like me. Intelligent. Focused. Serious.

But he’s not the man I imagined.

His reality is cruel and dark. He traps me in his web, his power twisting tighter the more I struggle, until it’s hopeless. I can’t break free.

As he drags me unwillingly into his filthy world, I can’t ignore the terrifying idea circling my mind. What if I belong here with him?

“His dark gaze swept over me and sharpened, cutting me bare. I felt naked under his assessing eyes. There was a flicker of recognition in him, which was surprising. We’d never spoken. I didn’t know him and he didn’t know me.”

Addison is a hard-working, somewhat naïve student. She doesn’t live the life of a normal college kid, but spends her days in the study books, to keep her much needed scholarship. For quite some time she has a crush on her former math PA Luka, but never did anything with that crush. When Addison sees Luka at a frat party she’s surprised he knows who she is, but she isn’t prepared at all for the man he turns out to be.

From the moment Addison sees Luka at the party, she wants to learn more about the somewhat older man. She knows him from the classroom, but outside he’s seems to be a different man. Wanting to let go for once she lets go of her ‘good girl’, and let’s Luka take the lead. What happens at the party sets the tone for the evolving story, dictates the actions and reactions from both Luka and Addison throughout the story.

Knowing the author’s other books, Sordid is very different. The author herself warns this book isn’t for everyone, and I agree with her, not all people should read this book. However, I myself happen to love reading dark and twisted books once awhile. What sets Sordid apart from other dark books is the very fine line between dark longings and non-consensual sex; it leaves you questioning the edgy relationship between Addison and Luka. Written in Addison’s POV Luka remains a bit of a mystery; his actions and reasoning are explained, but he still has his secrets.

“I love you,” he breathed. His words sent me soaring, and gave me the courage to admit the truth. “I love you, Luka.” We were two bodies moving as one.

I love Sordid, I give this unusual, twisted love story 5 stars.

~~ Sordid was provided in exchange for an honest review ~~ 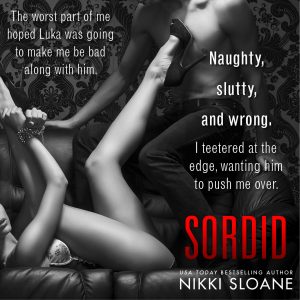 “So, Addison, we’re both stuck here for other people.” Luka took a step toward me, and even though there was still quite a bit of space left between us, his one small step felt enormous. Like he was now twice the size he’d been a second ago.

My chest was beginning to feel warm, no doubt from the tequila. “How is it you remember my name?”

“Probably for the same reason you remember mine.”

That was incredibly doubtful, but I kept my face plain. “Calculus was that memorable for you?”

“Yeah, it was. You were there every class, staring at me.”

I inhaled sharply, mortified, and tore my gaze away. “I did not.”

“Look at me.” His firm tone made it so there was no other option but to obey. When I did, his black eyes were focused and intense. “You stared when you didn’t think I could tell, but you weren’t very good at hiding it.” I opened my mouth to deny further, but he cut me off. “I was better than you. I made sure you never noticed I was looking.”

My brain disconnected and thought ceased. “Why?”

“What?” I was intelligent and well spoken, and yet I couldn’t choke out more than one word at a time.

Luka remained like a statue. He didn’t argue or defend himself, and tension wound around us like ruthless vines.

My question was breathy. “Why did you stare at me if you weren’t interested?”

“Did I say I wasn’t interested?” He took another step, growing larger still, reaching a point where I couldn’t see anything else. Just him. “Nobody looked at me the way you did, and I liked it. It’s exactly how you’re looking at me now.”

All the air vanished from the room.

“And how’s that?” It was dizzying when he took the final step and brought us chest to chest, his mouth inches from mine. Was any of this effect from the tequila, or was it all him? His gaze traced over each inch of my face, and I could feel it etching into my skin.

“Like you want me to do bad things to you.”

As he’d done, I stood motionless, neither confirming nor denying. I held my breath, waiting for him to make his move. I expected him to kiss me. Or maybe laugh in my face, although Luka didn’t seem like the type to laugh easily. He was deadly serious.

“Do you?” His question was soft and indifferent, even as it carried the weight of an enormous challenge.

Luka looked just as I felt—surprised by my admission. What had I just sort of agreed to? A tremble began in the backs of my knees and moved upward when his head tipped down. His mouth lowered until his warm lips sealed over mine.

Everything was madness. My actions, the situation, and most importantly, his kiss. I spun out of control under his mouth, surrendering to it completely, even as the kiss was tame. Luka pressed his lips to mine tentatively, but when I parted my lips to gasp, he took advantage.

His tongue dipped into my mouth and was an electric jolt straight between my legs. Did I taste like tequila as he did to me, or could he also taste my lust? I had two years’ worth, and this kiss broke the dam holding it back. It poured from me, and as I spun, I latched my hands onto his shoulders to keep myself steady.

What the hell was I doing?