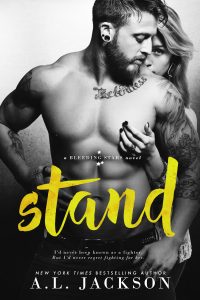 Zachary Kennedy has never been known as a fighter, but he’ll never regret fighting for her…

I’m Zee Kennedy.
Quiet. Reserved. Predictable.
When my brother died, everyone thought I was just the good guy who stepped up to take his place in the band.

No one knew what I was hiding. The one thing I’ve been fighting for.

Not until one chance encounter with Alexis Kensington.

Now she’s become my greatest temptation.
I knew better than to touch her, but now that I’ve had a taste, I can’t get enough.
Her kiss becomes my air. Her body my salvation.

She needed a savior and somehow she became mine.

Taking her was a betrayal. But keeping her means risking everything.
One look at Alexis Kensington, and I know she’s worth the fight.
Will my past continue to keep me down or will I finally find the strength to pull myself up and Stand…

Stand is the latest – and sadly the last – book in ‘the Bleeding Stars Series’ by A.L. Jackson. Like the other books in the series it’s an emotional story, full of heartbreak and inner conflict. Throughout the series, Zee was a bit of the odd Sunder member, but in Stand we finally get to know him, his story and the woman he falls for.

“Love’s a gamble, Alexis. The question is, are you willing to take the risk?”

Since the death of his brother Mark, Zee has taken his place as the drummer of Sunder. He’s a true musician, but unlike the other bandmembers (well, until they found their One) he doesn’t indulge in the Rockstar lifestyle. No wild parties and no sleeping around with the groupies who surround the band. A chance meeting with a young woman changes everything. Like Zee, Alexis is buried under guilt. She knows Zee will probably break her heart, but the sensitive guy is impossible to resist. He can’t promise her forever, but she doesn’t want to stay away.

“I knew I deserved it. I could never ask for anything more. I never questioned it. Never dreamed it could be any other way. Not until the day I met her.”

Zee and Alexis are both damaged people. They carry the weight of things they feel solely responsible for, while they shouldn’t. Both are trying to make up for their ‘wrongdoings’, but find it impossible. They don’t meet under ideal circumstances, very far from it, but when they see each other again Zee and Alexis can’t deny the attraction between them. Alexis dives into the relationship giving it her all, while Zee knows he can’t have her. It’s very clear from the start the couple belongs together, but especially Zee has to make peace with his past first.

Oh Zee, you poor poor guy. I feel so sorry for him. Through flashbacks we see him and his brother Mark, and the enfolding of their story. Combined with what we know of the current situation, you know it won’t end well. I just wish Zee told the other guys of Sunder sooner. Yes, they were wild guys, but they would have helped him because he was one of them. Alexis is his perfect woman. She’s sweet, she’s forgiving and she helps him heal, just as he helps her. I love them together.

“Faith and goodness and belief. This girl. I couldn’t have asked for anyone better, and I’d never thought I’d have a match. But this girl, she was my heart. My spirit. My soul.”

I love Stand, I give the story of Alexis and Zee 5 stars. 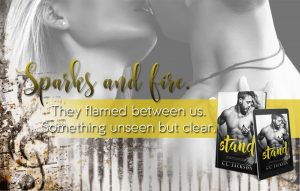