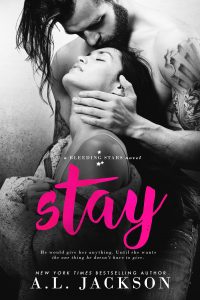 I’m Ash Evans.
The life of the party.
Hot. Rich. Charismatic.
A tattooed rock star with the world at my feet.
I burn through women faster than the strike of a match.

Willow Langston found me at my lowest.
Literally.
Facedown in a puddle of my own blood.

I owe her my life and I have three months to repay that debt.
What I never should have done was touch her. Kiss her. Take her to my bed.

Love wasn’t supposed to be a part of the equation.
I gave up that nasty complication a long damned time ago.
Now I want her more than my next breath.
But she doesn’t know what I know.

Do I leave to protect her? Or can I face my demons and ask her to Stay?

“What if you hurt me? What if I fall in love with you? What if I want you to stay?”

Ash is a popular, notorious rock star. As a member of Sunder, he’s known for his party life; drugs, booze and easy women. But underneath the bad boy persona there’s a man who knows hurt all too well, and who feels he didn’t do enough to protect the people he loves. When one of Ash’s wild nights catches up with him in the form of a beating, he’s found by a sweet woman who calls for rescue. Ash knows Willow deserves a better man then him, but he can’t stay away from her.

“I was only pretending she belonged to me. Because this girl deserved more. She deserved everything.”

Willow is beaten down by life. Her family has fallen apart over the years and the man she thought she was going to marry has hurt her badly. All Willow has left is her mother’s store, a place where she restores and sells old furniture. Unfortunately, thanks to her ex-boyfriend she’s about to lose the store, along with everything else she has. When she finds an injured man near her business, Willow calls for help. Later, she learns the man is Ash. Slowly they get to know each other, and soon she starts to feel something for him. Willow doesn’t want it, she doesn’t want to get hurt again. However, her heart tells her otherwise.

“The only thing I wanted was more. And more with this chaotic man was the very last thing I needed.”

Ash is a lady’s man, but he notices right away Willow is different. She’s so different from the normal groupies he hangs out with, but she calls to him in some way. Willow is burned badly by her ex-boyfriend, she isn’t looking for somebody but she can’t deny the feelings she has for Ash. Both know they should be careful, both don’t want to get hurt again. Ash had a real bad experience with a girlfriend in the past, and he still carries guilt for what happened to his sister Edie (her story is told in Wait). You feel Ash and Willow belong together, they’re a great couple and they can make it work. The road to their Happily Ever After is angst-y, full of hurt and regret, but they get there.

Like other books by A.L. Jackson, Stay is written in her distinctive, beautiful style. It’s about real people with real feelings and emotions. After the previous book in the series – Wait – I was so angry with Ash for bringing young Edie into a situation that could ended badly, which of course occurred. My heart hurts for Ash while reading his side of the story; while he should have looked after his sister more closely, he was going through a very rough patch himself. Ash and Willow both have to overcome a lot and work through some serious issues, I’m so happy with the ending they got.

“Because I caught a dream. And maybe it looks different than the way I’d always imagined. Different than I expected. But it’s real and the only thing I want is to share it with you.”

I love Stay, I give the story of Ash and Willow 4.5 stars.