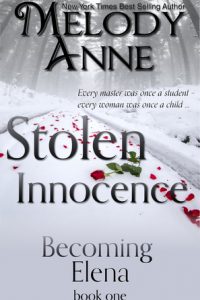 What makes a person forget their entire identity? What makes them become someone else? What makes them desire pain … control … and ultimately pleasure? It’s not anything that happens overnight, over even in a few weeks. Tragedy beyond what a human can possibly imagine will forever alter Mary’s future.

Mary’s life is boring, conservative and typical. She wants adventure, thrills and so much more. But she will soon learn to be careful what to wish for when she’s taken against her will and thrust into the twisted world of a powerful man who doesn’t care if she lives or dies.

When Mary starts becoming Elena, she does find a savior, but is he truly the person who will protect her, or will he be the one to escort her straight into the pits of hell?

Forgetting who she is or where she belongs, she learns she can trust no one, rely on only herself, and fall further than she ever thought possible. She will become someone else and the cycle will begin. She will become the person who will eventually change the life of so many others. Some might say the change is good, the violence is necessary. And some will cry for this tragedy that should have been stopped.

Just when you think you know how it all came about, how it will end, you will be floored again by who can be trusted … and who can’t.

I know Melody Anne for her sweet books, jerky Alpha’s who turn their ways for the women they fall in love with. Stolen Innocence is nothing like those books. Being the first part of the ‘Becoming Elena series’ it paints a brutal picture of human slavery. This story isn’t romantic in any way, and not for the faint of heart.

“Sometimes, the promise was taken out of a person’s hands. Sometimes their feet were swept out from beneath them. And sometimes promises were broken…”

Mary is your typical 17 year old. She lives with her mother, stepfather and little brother in small country town and can’t wait to leave for university. Being at the wrong place, at the wrong time changes everything. Her peaceful life is gone, replaced by the most horrible abuse, humiliation and degradation imaginable. She’s forced to forget her name, where she comes from, all that makes her Mary. She doesn’t surrender without a fight, but slowly her spirit and body are broken down, and she changes into Elena, leaving Mary behind.

“He was so precious, this little boy with no name. There was such light radiating from him. She wanted to know him. She knew she wasn’t allowed to know this boy. She didn’t know why, but she knew. “I’m Elena. I’m seventeen years old. My parents died…”

Stolen Innocence is a Dark story, nothing more, nothing less. Elena is surrounded by men, who are all nothing but brutal abusers, who like what they are doing. They don’t take things too far, but what’s done to Elena is horrific and painful to read. Two men seem to be better, seem to care for Elena in some way. But while one soon shows his true colors, the other one seems the worst to me, the devil in disguise.

Stolen Innocence is the first part of the ‘Becoming Elena series’, and ends in a little cliffhanger. The terrible things done to Mary/Elena aren’t described in full detail, but what’s being told reads like a nightmare. I will read the second part – Forever Lost – because I want to know if Elena will be able to escape from her cage, and to see how the cruel prologue of Stolen Innocence fits into the story.

“Gripping her arm, he then pushed her backward onto the bed and reached for his tie. Elena couldn’t breathe as she looked at this man with eyes of steel. Had she just made her life a hell of a lot worse? Was Dalton her savior or was he the one she needed saved from?”

While I absolutely hate what happened to Mary/Elena, her story is well written and terrifying. I give Stolen Innocence 3.5 stars.

~~ Stolen Innocence was provided in exchange for an honest review ~~