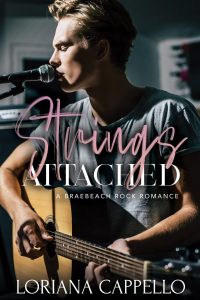 I received this book from Enticing Journey Book PR in exchange for an honest review. This does not affect my opinion of the book or the content of my review.

Ashton Chambers has one hell of a decision to make. Finish his final year of university or sign a lucrative record deal with his band, Koolum Law. Pressure from the record company, a commitment to his family and being the glue keeping the contract on the table, is weighing heavy on Ash’s shoulders. But that’s not his only dilemma. Calla Bryson is the girl who stole his 16-year-old heart and now she’s back to steal it all over again.

Ash and Calla have a history of bad timing.
The first time around, Ash’s best friend stood between them.
This time, it’s their potential careers.
The one guarantee they have is the summer together.
The one promise they make—no promises.

It has been a while since Loriana Cappello published a book (august 2019), but she’s finally back with a whole new story. Strings Attached tells the story of Calla and Ash, who know each other a long time. They where never involved romantically, but now sparks start to fly…

Ash and Calla are both in their early twenties and are living the life of normal students. Studying, part-time jobs, you know the drill. But where Calla is very serious about her studies, Ash is thinking about a whole different life as an artist. He and his band have a real talent and their dream is about to come true. Not knowing what the future will bring, Calla and Ash don’t want to make promises to each other. But it doesn’t take long before boundaries are crossed.

“Let’s not make promises we can’t keep. Let’s take what we have now and give it everything we’ve got.”

I love Calla and Ash, they’re good people who deserve to be loved. Both didn’t have the most normal childhood, but they both came out well. I love how they are with each other. Since they’ve been to the same school and had the same friends their friendship rekindles easily, but the love thing is a whole different story. They don’t want to fall in love, but of course they fail epically (in a very good way).

Like other books by Loriana Cappello, Strings Attached is about real people with feelings, insecurities and thoughts. In this book the characters are much younger then I am. My college days are long over (yippee), but I don’t mind reading about a couple in their early twenties. It reminds me of young love and a world of opportunities. Strings Attached is a sweet story with a wee bit of angst, but you know without a doubt the couple will end up together.

I love Calla and Ash, and their story. I can’t wait for future books from Ash’s band-members. 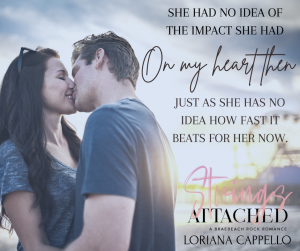