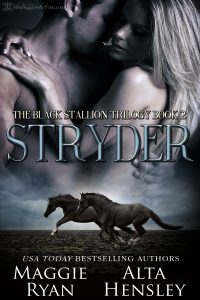 Stryder Steele, along with his two brothers and father, lives by one code: Help all in need. Even if it means saving those who walk among the most sinister criminals in the world. Known as The Black Stallions, their mission is simple – provide rescue and safety to the innocents drawn into the evil depths of the underground.

Zoya Morozova has been kidnapped and ready to be sold at an underground human auction in Moscow. Being sold to the highest bidder, she has no idea her life is about to change when her new Master is the dark and mysterious… Stryder Steele.

Bad boy Stryder remembers the pain of being unable to save another but he’ll put his life on the line to save this beautiful Russian farm girl. When he buys Zoya with the purpose of rescuing her, he has no idea that she may have the power to rescue him as well.

Flown to The Black Stallion Ranch, and with the help of Zoya and the knowledge of the human sex trade she has, can the Steeles put together the pieces in time to save all the innocent women who had been sold to the monsters of the underground, or will they lose to the mastermind of it all?

Stryder is the second book in ‘the Black Stallion Trilogy’ by author duo Maggie Ryan and Alta Hensley and picks up where the previous book – Maddox – left off. Maddox and his Adira are happily in love, but the villain from their book is still a free man. The Steele family is after him, and this places Zoya on their radar. This book tells the story of Zoya and Stryder.

“Zoya remembered Natalia’s question. Scared? No, she was beyond scared… beyond terrified, even. Zoya didn’t believe there was a word to describe the feeling that had consumed her from the moment she’d arrived.”

Zoya is a sweet woman from the Russian country side who unfortunately made the mistake to trust the wrong person. This one error has landed her in a hellish place; she’s prepped for an underground slave-auction, to be sold into sexual slavery to the highest bidder. Luckily, she’s ‘bought’ by Stryder, who isn’t at all like she thought her master would be. Although the whole situation has left a mark on Zoya, she’s determined to help the Steele men rescue the other women she met during her captivity. Slowly she starts to think of Stryder as much more than just her rescuer.

“He pulled her up and turned her around, her back to his chest as he moved her beneath the water. Warmth surrounded her, the hot water steaming over her front, his body heat against her back. “Shh, I’ve got you, honey.”

Stryder grew up dirt poor with just his mother. After her death, he was found and adopted by Drake Steele, which saved his life in so many ways. Stryder has a strong moral code for justice; rescuing people in danger is something he just has to do. When he sees the picture of a scared young woman who’s taken by human traffickers, she calls to him on a subconscious level. He has no time for a woman in his life, but Stryder can stay away from Zoya, the woman he rescued.

“I’m scared, Stryder. And I could really use a hug.” He thought his heart had shattered before when she showed her vulnerability. But nothing compared to what he felt now. Hell yes, he would hold her. Not only would he hold her, he would never let her go. Silently, he got up and moved to the bed. “Yes, I’ll hold you for as long as you want.”

Stryder and Zoya meet under horrible circumstances, at an illegal sex-slave auction in Russia. Zoya is a slave, Stryder pretends to be a buyer to get closer to an evil man. Away from the hellhole Zoya is happy she got away from a horrible faith, but she can’t stop thinking about the women left behind. Stryder and his brothers and father are working side by side to eliminate the villain, but also to find the other women from the auction. It’s a bit of a bad timing for Zoya and Stryder, but they can’t stay away from each other. Like his brothers, Stryder is into BDSM, and he gladly introduces a willing Zoya to the pleasures of his preferences.

Like the previous book – Maddox – Stryder is much more than just the story of a couple falling in love. Yes, Zoya and Stryder fall hard and fast for each other and have some hot encounters, but it’s also the story of the fight from the Steele family against a dark underworld. One minor detail; I was expecting a story containing more BDSM than Stryder did, but I can life with it. I was surprised with the ending of a certain plotline, but I’m happy with the decision by the authors. The next book in the trilogy will be busy enough, I can’t wait to read the story of Anson and Natalia.

“Zoya, I knew you belonged to me and I promised myself that once I had you in my arms, I’d do whatever it took to keep from seeing that hopelessness ever again. I love you. God, I love you so much it hurts.” “I love you, too.”

I’ve enjoyed reading Stryder, I give it 4 stars.