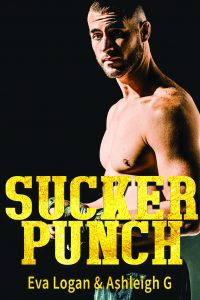 His big dreams have left him at rock bottom and when you’ve lost everything, losing becomes easy because there’s nothing to fight for.
The love of his life left him for a life he couldn’t give her and now she’s engaged and on top of the world while he claws his way out of the hole he dug when she left.

Lotus Shaw plays the role of the media’s darling, and dutiful fiancé to a man only her parents approve of. She should be on top of the world, but she left her heart on the floor of a fight gym.

Now, she’s got to get it back.

One little secret from the past is keeping her from the future.

When they come face to face again, nothing could’ve prepared them for the sucker punch love was about to land.
Nothing worth having comes without a fight.

Getting back together with the person who broke your heart? A good idea or not? In the case of Chad and Lola it is actually a good idea, because not all is what it seems. Sucker Punch tells their chaotic story, with all its ups and downs.

“First kisses, first dances, first everythings. My mouth goes dry, all the moisture filling up in my eyes. I won’t allow the tears to break free, but they’re there, just below the surface.”

Chad and Lola have been best friends forever, who fell in love at a very young age. They were each other’s everything, until it all blew up in their faces. Fast forward a few years. Chad is finally ready to take another shot at love (or something that looks like love), and Lola is dealing with the mess that has become her life. When Chad and Lola meet again it’s explosive, and it’s very clear they still have feelings for each other. Feelings they don’t want to have but can’t ignore.

“There’s something about her, something inside us that can’t be ignored. We become animals. It’s instinct. I can’t bury it and if I ignore it, it’ll consume me.”

Chad and Lola, what do I say… They are messy, in-your-face and not sure about each other. Chad is your typical guy with a broken heart. He doesn’t talk about it, but under the surface there’s a world of hurt and anger. Boxing is his life, and it keeps him going. Lola is no prissy princess. She might look the part, but she’s a hellion who doesn’t mind throwing in a few punches herself. I love the two of them together.

Sucker Punch is the second collaboration between Eva Logan and Ashleigh Giannoccaro and is about one of my favorite storylines; a second-chance love story. Chad and Lola had something special, but it got ruined badly and both have different ideas about what broke them apart. I hate what happened to this couple, but I love that they find their messy way back to each other. Their story isn’t always pretty, but it’s realistic (love isn’t always a fairytale, right?).

“I love you, Lola. You have been mine since the day I saw you wearing pigtails and pink socks. I knew I loved you even then.” 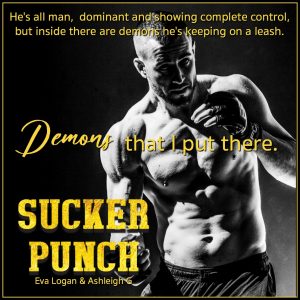