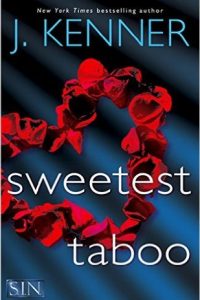 Everyone has their own ideas about Dallas Sykes: He’s a reckless billionaire, a devilish playboy, a man who gets whatever he wants the minute he wants it. But I know the real Dallas behind the money, bravado, and power—and he’s completely, blissfully mine.

We carefully guarded our secrets, and in each other’s arms we sought refuge from our dark past. Our pain became our pleasure, our control within the chaos. But we could only hide from the truth for so long.

Now we’ve let loose our inhibitions and are ready to face the future. And no matter what people think or say, coming clean is its own sweet reward.

Sweetest Taboo is the final book in the S.I.N. series by J. Kenner. This book starts where the previous book – Hottest Mess – left off, and takes the reader right back in the world of Jane and Dallas. Since it’s an ongoing story, these books needs to be read in order and I really like them.

“Their eyes met and held, and for a moment there was no time, no space, no world that judged them. There was just them.”

Jane and Dallas are not in a good place. After learning some devastating news at the end of the last book Jane ran off, not knowing what to think anymore. And while she rans, Jane is being taken by the Woman who played a key role in the abduction of her and Dallas all those years ago. Fortunately, Jane is found quickly, but knowing it had to do with their kidnapping in their teenage years, Dallas does all he can the find out the truth. Even when it turns out the truth could hurt, not only him and Jane but also other loved ones.

“Wrong. Dirty. Sinful. She was the best part of his life, and yet all that the world reflected back to them was dirt and shame.”

While Dallas and Jane know they belong together as a romantic couple, they still have to face the outside world. Not just their parents, but also the paparazzi and tabloids. Falling in love with each other while you’re raised as brother and sister from a young age combined with Dallas’ reputation is something the public eats up. Of course Dallas and Jane have their moments of doubts, but the love for each other is much stronger. Their road to a HEA isn’t an easy one, but in the end Dallas and Jane have what they’ve always wanted; each other.

Sweetest Taboo in the conclusion to the story of Jane and Dallas, and finally all is out in the open. Not just the relationship between the main couple, but also the truth about their kidnapping seventeen years ago. More importantly, finally Dallas and Jane know who the Woman is who damaged Dallas so very much. I had my suspicion already in the second book, and it turned out I was right. Sweetest Taboo is written in J. Kenner’s distinctive style, I love it. But just as in another series I’ve read by this author, there is so much sex in this series. While I enjoy the mystery, the flashbacks and the interaction between the main couple and other characters, I started to skim the sexy times. It just was a bit too much.

“I’ve loved you for as long as I can remember, and I will love for the rest of my life and beyond. I don’t want to spend a day without you. You inspire me. You humble me. You’re my best friend and my deepest passion. The other half of me.”

I’ve enjoyed reading Sweetest Taboo, and I’m happy with the ending Jane and Dallas have gotten. I give this story 4 stars. 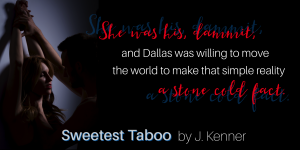