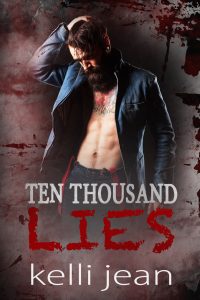 On the surface, Ricki Conklin is just an average bloke, a brilliant tattooist with his own shop.
Below the surface, he’s a vigilante revenge-seeker, atoning for a past he fears will never set him free.

Jaime is his everything, his foul-mouthed Dollface.
Covered in ink from collarbone to feet, she’s a wild child after his heart.
Set adrift, losing faith in herself and humanity, she’s broken down not by abuse, but by neglect. For years, she exists only so she can finally come home.

This is their story.

A couple of months ago I’ve read the first book in ‘the Ten Thousand series’ by Kelli Jean. She was a new author for me, and I’ve really enjoyed reading the book. Ten Thousand Lies is the second book in the story and tells the story of Ricki and Jami. The first book – Then Thousand Words – was a sweet book, but it hinted at the darker subjects coming in the future books. And darker it is.. The romance is still sweet, but the what Ricki and his friends encounter on a regular basis is anything but sweet.

“It was time to face the unknown. The future before me stretched out into black nothingness. I had no idea what I was supposed to do. My entire life before now had been controlled.”

Ricki is born into a dysfunctional family; his father is a British crime lord without any morals who deals with the scum of the earth, his mother is a sweet woman, broken down by her despicable husband. Although she’s obedient in every way, she has taught her sons to be good, to think for themselves, not to become monsters like their father. And it has worked; while Ricki acts how his father wants him to on the surface, beneath the surface he makes different choices, very dangerous choices. When he and his friends rescue a young boy from his father’s clutches, Ricki is forced to leave the life he knows behind. He moves to Amsterdam and joins an organization that rescues abused victims and makes their torturers pay. Over the years he forms a telephone-call friendship with Jaime, one of Xanthe’s best friends (Xanthe is the heroine of Ten Thousand Words). Meeting her in real life changes everything.

“Over time, I had grown to love Jaime. It was hard not to. She was strong, freakishly independent—which I knew was from a lifetime of having only herself to rely upon—with a heart hell-bent on saving the world.”

Though Jaime has grown up in a far more normal family, she didn’t have a close relationship with her mother. When she’s just turned 18, Jaime is forced to move out her mother’s house and to look after herself. She starts working and saving her money to be able to move to Amsterdam, to be closer to her best friend Xanthe. Throughout her years living on her own in England Jaime grows close with Ricki, a guy she has never met in person. Although she lives her life, Ricki is a constant and they tell each other everything on the phone. Seeing him after a radio silence for real in Amsterdam, she tries to keep her feelings under control (and of course fails big time..).

“It’s nice to…well, I guess meet is a little strong of a word for this situation,” I stated, feeling like the biggest nerd on the planet. Ricki chuckled, and something tingled between my legs. Holy shit. His voice was audible sex. The British accent did funny things to me, too.”

Although they haven’t met in person, the telephone conversations between Ricki and Jaime are getting more and more personal as the years go by. When Jaime finally arrives in Amsterdam the two of them aren’t on speaking terms, but it doesn’t take long before they are talking again. Given the chemistry between the couple the relation slowly progresses into a physical one. To Jaime’s surprise Ricki is very sweet with her, but given his past it isn’t a surprise. When Ricki finally understands what Jaime needs (Thank you Xanthe) things get hot and explosive.

Ten Thousand Lies is the second book in ‘the Ten Thousand series’. In the first book of the series – with Xanthe and Ollie as the main couple – Ricki and Jaime are already a committed, loving couple, so this books gives us the story how they get together and make their relationship work. It was a little weird to see Xanthe not with Ollie, but with Deo for a large part of this book. As the author already said the books in the series will get darker, and they did a bit. Through the eyes of Ricki and his friends you get a brutal picture of human trafficking and the nasty players involved.

“You feel so good,” he murmured against my lips. “I can’t ever get enough of you. I’ll never have enough…” Neither would I. I was lost to this man, had been from the second I heard his voice.”

I’ve enjoyed reading Ten Thousand Lies, and I can’t wait for the future books in this series. I give the story of Ricki and Jaime 4 stars.

~~ Ten Thousand Lies was provided in exchange for an honest review ~~