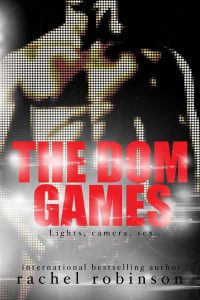 Ten submissive women. One billionaire dominant. Three months competing for his “affections.” One winner takes all.

Dominic Reed, heir to an oil fortune, has spent his entire adult life perfecting his dark hobby. With little control in every other area of his manicured life, he finds his release as a dominant. With more money than he knows what to do with, he creates a TV show: The Dom Games.

This year is different than the past seasons, this year Dominic will be the star. He wants a forever submissive.

Before last month Kayla Parchet thought the word submissive only referred to dogs. Fresh out of college with a business degree that is scrap paper, she needs to get an Ivy League masters degree to pursue her dreams. When Kayla is accepted to be one of the ten, her world takes a dark turn as she competes against women who live the submissive lifestyle for enjoyment. Can she hold on to her dreams long enough to win the competition and ten million dollars? Or will she get sucked into Dominic’s twisted world?

Only a few whips and canes stand between Kayla and the future she’s always desired.

The synopsis of The Dom Games by Rachel Robinson reminds me of tv-shows like the bachelor. I don’t like to watch them, because all of the hurt feelings and jealousy. Still, this book intrigued me. Going in I knew I would feel angst and heartbreak and boy, I so did. However, I love this book, it makes me feel both happy and upset and everything in between.

“Will he be able to smell my fear and inexperience right away, or can I fake it enough to fight my way to the top?”

“Slowly, I turn my head up to face him. He’s still wearing his black suit and tie. I have to admit, the professionalism makes him seem older, wiser, even more dangerous than I thought possible. “Sir,”

Dominic Reed is a man in control, he knows what he wants and likes in his relations with women; he likes them submissive, suitable to his lifestyle. Having created the Dom Games and worked on the show a few years, this year he’s the Dom looking for a submissive. Most submissive women Dominic knows – and the women on the show – are the same type, he isn’t sure what he’s looking for anymore. The very not-submissive Kayla immediately catches his eye, makes him question himself.

“Kayla,” I say when I’m directly in front of her. I can smell her perfume. Another rule she’s broken. Her eyes aren’t turned down. No, of course not. She’s staring at my face with a befuddled look on her face. “What am I going to do with you?”

From the moment Dominic sees Kayla, he knows she’s different, that she isn’t a submissive at all. Still, he lets her enter the Games, fully knowing the scenes and competition won’t be her thing. Kayla herself is attracted to the big man, and fights him at every corner. It doesn’t take long before she develops feelings for him, knowing he is with the other nine women as well during scenes. Dominic knows he’s hurting her, but he’s conflicted. His heart and his needs are two different opposites, and then he also has to think about the tv-show as a whole. When Kayla finally has enough after a harsh scene, she flees, leaving Dominic behind.

The Dom Games is a very well written book, like other books by Rachel Robinson. I love her way of writing and realistic feelings and reactions she gives to her characters. I can completely identify with Kayla; I felt her all of her insecurities, jealousy and heartbreak. Throughout the book there were moments I wanted to strangle Dominic, but I also saw his confusion and inner struggles. The epilogue made me swoon, it made up for all the angst-y moments in the book.

“I love him because despite everything he’s been through, he’s still a good person. He doesn’t use his money or his status to weasel his way around the world. He works for it. Dominic is noble. He’s kind. And as he kisses me—makes love to me so tenderly and passionately—I know he’ll never expect me to be his submissive. He wants me as his equal.”

I love The Dom Games and highly recommend it. I give the story of Dominic and Kayla 5 stars.

~~ The Dom Games was provided in exchange for an honest review ~~

“Are you ready?” I ask, placing my palm on her sweaty stomach. She’s so petite that my hand spans her entire stomach. It rises and falls with each deep breath she takes. This power I feel right now is utter heaven. She’s mine in every way possible, and no one can deny it. Fury of possession and lust hit me. I don’t want to hold back any longer.

Kayla nods. Gritting my teeth, I unfasten her gag and pull it away with a long strand of spit connecting it to her mouth. Her lips part and close a few times as she adjusts to the new sensation.

Removing the gag does give me pause, because she could potentially say something un-sub like and ruin the scene, but at this point I wouldn’t even care, I’ll still fuck her. My cock is heavy and dripping with pre-come. I glance at the large, digital clock to my right to make sure my timing is on par and catch sight of the crew.