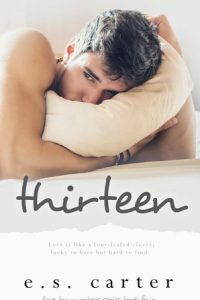 Thirteen...
Unlucky for some.
Including me.

The woman I loved left me on the thirteenth.
Thirteen months of living together and she walked out the door without looking back, straight into another man's arms.
She was kind enough to leave something to remind me of her: thirteen thousand pounds worth of debt.

Thirteen; the day I lost my nuts.
Well, I didn't lose them, cancer took them from me. Better to be a man without balls than one without life.
Still, thirteen sucked... until it didn't.

Until her.
Thirteen might just be my new lucky number.

*Thirteen is book #4 in the 'Love by Numbers' series. It is interconnected but can be read as a standalone.*

Last month I’ve read my first book by E.S. Carter – Three – and I loved it. A certain scene from that book still puts a smile on my face; the very funny kitchen conversation between Harry and Liam’s parents. Thirteen tells his sweet and hilarious story.

“It all comes rushing back to me. Friday the 13th. Hospital. Operation. No more nuts. Fuck. I think I preferred the thought of being a sex pony. Friday the thir-fucking-teenth. Unlucky for some. Including me.”

Harry ‘H’ hasn’t been lucky in love; left by his greedy girlfriend and since his operation all of his dates have been disastrous. But luckily he gets to spend a lot of time with his best friends, the Fox brothers, entertaining them with his crazy antics. Harry is all about jokes and banter, but behind the fun he hides his sadness and insecurities. Meeting Delilah throws him off his game, finally he has found his match.

“Coffee?” I tilt my head in mock confusion, and that blush reappears on his cheeks. “No, it was…” “Mustangs? Bunny fetishes?” His eyes go wide, and I can’t help the laugh that slips free, “I’m just messing with you. Tell me, H. Are you always this easy to rattle?”

Delilah ‘Lilah’ is a survivor. She has survived a horrible disease as a young child, leaving her with a permanent reminder. When she was told during her teenage years she couldn’t do something, she gave it her all to prove the people wrong, leading her to a disastrous marriage. Nowadays she lives with her twin sister, loves her job and spends time with friends. When she sees Harry for the first time all she wants is to make him laugh.

“I blink rapidly, relieved I didn’t choose that option. “I haven’t got a clue what you’re talking about.” “Or the strip joint on the high street?” I shake my head quickly, “No, I’ve never been there before. I didn’t even know there is a strip joint in town.” I lie unconvincingly. “Naked massage?” Who the fuck is this girl and how is she in my brain?”

Knowing Harry from the previous book, knowing how inappropriate he can be, he has met his equal in Delilah. The banter, text messages and ‘payback’ dates between them are hilarious. Both have been in relationships before, but they recognize the growing attraction between them. They form a friendship, and slowly work to something much more. Due to her marriage Delilah is somewhat insecure about her body, but Harry proves he can be the man for her.

Thirteen is a sweet and funny read. From early on you know that Harry and Delilah are meant to be together, they have a serious situation to work through, but there isn’t angst, no question of them not being together. Besides the developing relation between Harry and Delilah, I love the bond she shares with her twin sister Nicola. I really hope E.S. Carter will write a short story about her and her Doctor Hottie.

“He rests his forehead against mine, and whispers, “How did I get so lucky to not only find you but get to keep you? My lucky number thirteen.” I place my hands on both sides of his face and pull his lips to mine, “Because luck has nothing to do with it. You see what others don’t, and in this life, you get what you give.”

I’ve enjoyed reading Thirteen, most parts put one big smile on my face. I give this story 4.5 stars.

~~ Thirteen was provided in exchange for an honest review ~~ 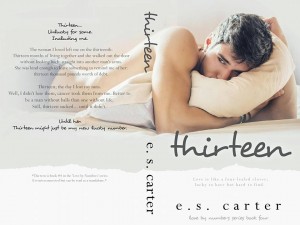