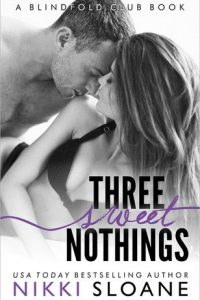 Five years ago, we’d been together and on fire, but the flames burned us both. Now she’s back in my life and is all my wildest fantasies in the flesh.

I want her. The desire is too powerful to argue against, but I’m not interested in what we had. This is an arrangement about pleasure and finding out who we are behind closed doors. There won’t be talk of love or any sweet nothings whispered by either of us.

This time, I’ll control the heat and make sure neither of our hearts get too close to the flames.

Three Sweet Nothings by Nikki Sloane is already the 5th book in ‘the Blindfold Club series’. Like the other books in the series it tells the story of two people working out a relationship, with some little added kink. Three Sweet Nothings can be read as a standalone, but I recommend you read the whole series. Not only to get a better understanding of some of the side characters, but because they are great stories.

“I’d convinced her to give me a shot once. Could I do it again? And… did I really want to? There were days when simply hearing her name scraped at the hole left where she’d ripped my heart out.”

Kyle and Ruby are both lawyers who spend most of their time working and both haven’t had a serious relationship for some time. In college, Ruby and Kyle were a couple; a friendship turned into much more, and both were not afraid to experiment. But things ended badly; miscommunication, wrong assumptions and hurt feelings do that to a couple. Now, five years later, Kyle and Ruby meet again while representing their clients. The attraction is still there, but there are also questions and unspoken words.

“I’d waited five years for contact, waited for his apology. So when I finally got to hear his deep, sexy voice and the first words weren’t, “I’m so fucking sorry that I’m a piece of shit asshole,” I almost reached across the table and slapped him.”

“God, it’s like you can read my mind. My dirty, dirty mind.” I set her down on the bed and began to strip. “What am I thinking about right now?” “That I’m amazing, and you love me?” I couldn’t have smiled wider if I tried. “You’re absolutely right.”

Three Sweet Nothings is a second-chance romance. Kyle and Ruby’s first chance in college ended badly, but now they can make it work. I love this couple, they have great chemistry and are willing to act on their sexual desires. Like in the other books by Nikki Sloane there is a scene where the leading couple is sexually engaged with other people, but it doesn’t take anything away from the growing bond between them. Both Kyle and Ruby are open minded, sexual confident and not afraid to voice their fantasies. It was good to see the couples from the previous books, especially Joseph and Noemi.

“I love you, Ruby. There’s nothing that’s going to change that.” There was more emotion on his face than ever before. His eyes filled with longing. “It’s always been you.”

I love Three Sweet Nothings, I give the story of Ruby and Kyle 5 stars. 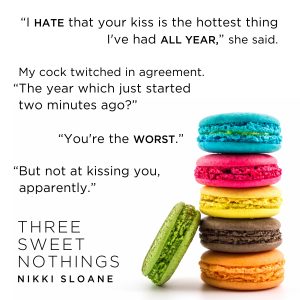