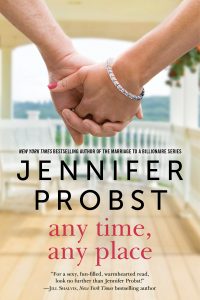 When she was a teen, Raven Bella Stratton’s father was killed in a horrible car crash. The bigger shock was the discovery of a woman with him—Diana Pierce—and their two fully packed suitcases with airline tickets to Paris. Devastated by her father’s betrayal, Raven went to live with her aunt, never truly overcoming the traumatic event. When she discovers that the mysterious woman had a family with a husband and three boys, Raven vows to leave the memory of her father behind.

Until Dalton Pierce visits one night and suddenly her past challenges her future...

Leaving his life in California behind to run Pierce Construction with his two older brothers, Dalton Pierce has enjoyed returning home and studying his passion of woodworking. But when he visits the local bar with his brothers one evening, he’s immediately drawn to the smart-mouthed, badass, sexy bartender who sets his body on fire. Unfortunately, she doesn’t seem as intrigued by him, and his multiple advances are met with rejection. When he offers to restore the bar back to its original glory, he begins to work with her on a daily basis, and falls harder. His plan of seduction slowly weaves a web around them both, until they are caught up in the spell. But Dalton doesn’t know the secret that can either destroy them both...or finally mend two broken hearts.

Any Time, Any Place is the second book in ‘the Billionaire Builders series’ by Jennifer Probst. This book tells the story of Dalton – the youngest of the Pierce brothers – and Raven. They are not only connected by their mutual attraction, but also by a tragic event that shaped their lives. I’ve enjoyed reading Dalton and Raven’s story.

“Stop being stupid. It’s only a game. He plays his, and I play mine.”

Raven is the proud owner of ‘My Place’, a popular new bar in Harrington. On the outside she’s a confident woman, but on the inside Raven is still a hurt teenager. After her father died her whole life changed, leaving Raven with a lot of questions. Grown-up Raven is still wondering about the circumstances of her father’s death, but nobody can give her answers. When Raven sees Dalton in her pub, she’s angry at first. She doesn’t want him in her bar, given he’s the son of the woman her father died with. When they get to know each other better, Raven start to have feelings for Dalton.

“A real Don Juan, aren’t you? As pretty as those words are, you’re not getting me.” “You misunderstand.” She lifted a brow. “Hard to misunderstand that one.”

After the death of his beloved mother Dalton feels betrayed and left behind. Even now, as a grown man, he still finds it difficult to talk about his mother’s demise and what was left of his family. Yes, he had a father and older brothers, but the men fell apart, each in a different direction. When Dalton and his brothers Cal and Tristan inherit the family company after their father’s death, the brothers finally start speaking to each other again. All is good in Dalton’s life; he enjoys his work, his free life and all. Bar owner Raven intrigues him, he can’t stay away from the woman who tries to keep him at a distance.

“He wanted Raven. Not only in his bed, but he wanted her laugh, her banter, her passion. Wanted to see those inky eyes fog up when he touched her. When he made her come.”

The moment Dalton walks into Raven’s bar she knows who he is. The son of the woman her father ran away with, the woman he died with. Dalton however doesn’t know who Raven is. He sees a captivating woman who turns him down, not only him, but also the expertise that can help her restore her pub. Working together and spending time with each other slowly breaks down Raven’s walls. She sees Dalton is much more than his mother’s son, and that he also struggles with the death of their parents. Dalton isn’t a relationship guy, but for Raven he’s willing to try, he knows she’s a special woman. The couple’s road to their Happily Ever After is a bit rocky; angst, hurt feelings, anger and sadness play a role.

As already said, I’ve enjoyed reading Any Time, Any Place. The first book left me with questions about the Pierce family, about the parents and the family dynamics. This book gives answers to those questions, and I feel sorry for the Pierce brothers, and their mother. Like other books by Jennifer Probst, Any Time, Any Place is an easy read, but with real situations and emotions. I love Dalton and Raven together, I understand both their thoughts and motives, but I still wanted to shack some sense into them. Hiding the truth isn’t working, even in a fictional story. I love that Raven doesn’t forgive Dalton too easily for his hurtful actions, she lets him grovel in a good way.

“You’ll be mine?” “I think I always was, Dalton Pierce,” she whispered against his lips. “Now will you stop talking and kiss me?”

I give Any Time, Any Place 4 stars. I can’t wait for the story of Tristan and Sydney, second-chance stories are one of my favorites! 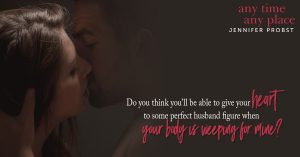