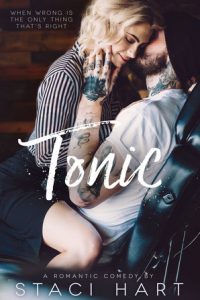 Not his relationships, which have been few and far between since his brutal divorce. Not the drama of working in a tattoo parlor, which seems to be around every corner. When things get him down, he smiles and cracks a joke. But he’s not the kind of man you cross, or you’ll find yourself at the wrong end of his fists.

Like her job as a reality television producer, given that she typically has something to prove. Or her love life, which is defined by a series of requirements — affluent, ambitious, accomplished, to name a few. Definitely her family, who worked their whole lives to afford her every opportunity, a sacrifice she doesn’t take lightly. When she’s tapped to produce a reality show at Joel’s shop, she doesn’t think twice, just goes in for the kill, as if there were any other way.

The second Annika walks into Joel’s shop, he makes it his mission to crack her open, but she’s not having it. He’s all wrong — too crass, too hairy, too un-serious. But it doesn’t take her long to find out there’s more to him than smirks and tattoos. And what she finds could put her career and his heart on the line.

Not that Joel cares. Because for the first time in a long time, he’s found his tonic.

“Didn’t anyone ever tell you it’s not polite to stare?” “Sure, but when I see a stone-cold fox such as yourself, I find it hard not to look.”

Annika is a sweet young woman who lives with her niece Roxy and her niece’s young daughter. She’s close to her parents and loves her job. When Annika entered the world of television and reality tv, she quickly learned to hide her feelings and to create a work-persona, to avoid being hurt. Annika’s first job as an Executive Producer of a new reality show leads her to tattoo parlor Tonic, where she meets owner Joel. He’s the total opposite of every man she has ever dated, but she can’t deny the attraction between them.

“The unflappable Annika, completely flapped.” “I am not flapped. In fact, I’m the opposite of flapped.” “That’s what I’m saying. Usually you smile and schmooze, but you shut down like New York during a blizzard.” I tightened my lips to stop myself from sulking and changed the subject. “He’s awful.”

Joel is the proud owner of Tonic. After the death of his parents when he was in his early twenties, he has taken care of himself and his younger brother Shep. Tonic is doing well, but extra publicity in the form of a reality show is very welcome according to Shep, Joel is less keen on the idea. But meeting Executive Producer Annika changes his mind. Joel has no problem attracting women, but the cold demeanor of Annika is a challenge he can’t refuse.

“There was something more to her, but I couldn’t figure out what. And I wanted to know. I then decided two things. One: My new mission in life was to make her laugh. Two: I’d crack her open if it was the last thing I did.”

Joel and Annika are a typical couple of ‘opposites attract’. Annika normally falls for clean-cut, well dressed business men, Joel is nothing like that. Add to that their work relationship and the manipulative world of reality tv.. Annika knows it’s wiser to stay away from Joel. Joel is a bit older, knows what he wants and how. After his divorce he has dated plenty of women, but Annika is something different. After a somewhat hostile start it turns out Joel and Annika are very right for each other; they have great chemistry and hot sex. But can their relationship survive the making of a reality show?

Tonic is the very first book from Staci Hart I’ve read. The author pleasantly surprised me with her writing and the realness of her characters. I love how Joel and Annika are together, inside and outside the bedroom. I get they both had their own reasons, but I wish they talked about the working situation sooner. Reality tv can be very entertaining to watch, and the manipulation of situations is a given fact for those shows. Besides Annika and Joel, I really liked Roxy. I’m curious about her past and who the father of her daughter is. I hope she will get her own story.

“I was caged in his arms, his fingers in my hair, his body against mine, and I was safe. I was whole. I was his.”

I’ve enjoyed reading Tonic, I give the story of Joel and Annika 4 stars. I will definitely pick up the other books written by Staci Hart. 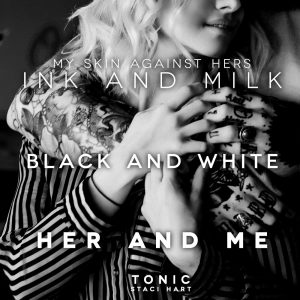 “What?” I blustered, caught off guard.

“Stand up and turn around. I want to see it.” I was too surprised and caught up in the moment to refuse, so I stood and turned, laying my palms on the armrests as I faced the back of the chair.

One hand rested on my hip.

My heart stopped as I wondered what the hell I’d gotten myself into.

I glanced over my shoulder, my gaze bouncing between his face —turned down too much to read —and his reflection in the speckled, antique mirror, which I couldn’t see much of either. His free hand moved to the waistband of my tailored pants, and his fingers hooked and tugged, pulling the band down low.

His thumb ran over where I knew the tattoo was, and I felt his breath. Every place where we connected spoke to me of ownership.

“You got this done here? In New York?” His voice was rough.

Mine wasn’t much better. “Yeah. In Brooklyn.”

“Let me cover it up for you. Give you something you’re proud of. Your skin …” He paused, and I wished I could see his face, read his mind. “This shouldn’t be here, not on you. Let me … I want to …” He had moved closer, his hand on my hip pulling me back into him slightly enough for me to not have noticed that the backs of my thighs were touching his, my back arched just enough, his breath hot.

And then, he disappeared. I stood, finding my hands were trembling, wondering where I was and how I’d gotten there. The shop was mostly empty —no one had seen, not that it would have looked like much from the outside. But from where I stood, I felt every single deliberate move like a telegraph, telling me exactly what he wanted to do without him having to finish the sentence.

His back was to me when I turned around, his face down —I couldn’t see it in the mirror over his cabinet of ink and needles as he dug around in the drawers, seemingly for nothing in particular.

“Let me know if you want me to draw something up.”

“Okay, I will.” I paused, not knowing what else to say, feeling like I should say something. But there was nothing that I could say. “Well, have a good night, Joel. I’ll see you tomorrow.”

He nodded, glancing at me in the mirror. “See you, Annika.”

I tried not to bolt out of the shop, but once outside, I admit it —I took off. I hauled up the stairs and into the office to grab my bag, grateful that Laney was already gone, and I texted my driver, asking him to pick me up a few blocks away so I could walk, put some distance between me and Joel, get the energy out of my body, through my legs and feet, into the pavement.