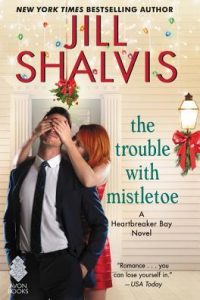 Willa Davis is wrangling puppies when Keane Winters stalks into her pet shop with frustration in his chocolate-brown eyes and a pink bedazzled cat carrier in his hand. He needs a kitty sitter, stat. But the last thing Willa needs is to rescue a guy who doesn’t even remember her ...

He’ll get nothing but coal in his stocking.

Saddled with his great-aunt’s Feline from Hell, Keane is desperate to leave her in someone else’s capable hands. But in spite of the fact that he’s sure he’s never seen the drop-dead-gorgeous pet shop owner before, she seems to be mad at him ...

Unless he tempers “naughty” with a special kind of nice ...

Willa can’t deny that Keane’s changed since high school: he’s less arrogant, for one thing—but can she trust him not to break her heart again? It’s time to throw a coin in the fountain, make a Christmas wish—and let the mistletoe do its work ...

“You really going to tell me you don’t feel it?” She chewed on that for a moment. “I’m telling you I don’t want to feel it,” she finally said. Welcome to my club, he thought.”

Willa has grown up in the foster system. After her mother couldn’t take care of her any longer she lived with foster families, always something temporary. But Willa has made something of her life, has a close group of friends and is the proud owner of her own pet shop.  In her shop she employs younger women with a similar background as her own, she wants to help them by giving an honest, real chance. In the love department Willa isn’t very lucky, and currently she’s on a self-imposed Man-Time-Out. Seeing Keane makes her feel all kinds of things; from very annoyed to very interested. After all, he stood her up once.

“There was something familiar about him, enough that her feet propelled her forward out of pure curiosity. When it hit her halfway to the door, she froze, her heart just about skidding to a stop. “Keane Winters,” she murmured, lip curling like she’d just eaten a black licorice. She hated black licorice.”

Keane is a hard working man who buys properties, renovates and sells them. Although he’s the boss, he does a lot of the work himself and doesn’t mind to get his hands dirty. From an early age Keane knew he had different plans in life then his parents and older siblings, who are all college professors. Always acting out and creating havoc they didn’t want to spend much time with him, making him feel the odd duck of the family. Till this day Keane chooses to keep all things temporary; homes, women, everything. Meeting Willa in her pet shop changes everything, wanted or not..

“Willa was unlike any woman he’d ever met. She was passionate, smart, sexy . . . and she made him laugh. And her smile could light up his entire day. He wasn’t actually sure what to do with that, but he knew he wanted to do something.”

At first Willa doesn’t want to have anything to do with Keane, but with the help of his aunt’s cat Keane slowly squeezes himself into her life. When all is out in the open and Keane knows about the reason of Willa’s dislike the couple starts to form some sort of friendship, with growing feelings in the mix. But this is a romance book, and a romance book without some misunderstandings or hurt feelings isn’t any fun. Willa and Keane are both product of their upbringing, which have left each of them with a series of ingrained thoughts. They have to overcome those feelings by themselves to have a shot at something real. And this being a Jill Shalvis book, you know they will have that shot.

Like other Jill Shalvis books, The Trouble with Mistletoe is a sweet and easy read. Keane and Willa are both very likeable characters who you wish all the best in the world. Although I was a bit frustrated with their actions and thoughts at times, I understood where it came from. I was so happy when they finally where on the same path and where able to admit their feelings. The side characters in this story are a rowdy group of friends, I really like them. Some hints are given for their future stories; I can’t wait to read them.

“I love your crazy. I love you, Willa. With everything that I am, I love you.” “Oh,” she breathed softly. “You’re good.” “Give me five minutes in that shower and you’ll see how much better than good I really am.” She smiled against his lips. “I haven’t given you your Christmas present yet.” “What is it?” he asked. “Me.”

I’ve enjoyed reading The Trouble with Mistletoe. I give the story of Willa and Keane 4 stars. 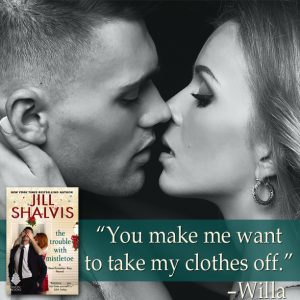