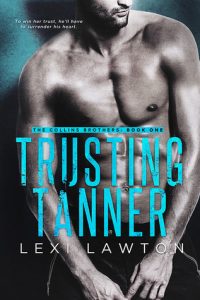 I received this book from IndieSage PR in exchange for an honest review. This does not affect my opinion of the book or the content of my review.

Tanner Collins is the embodiment of perfection—tall, dark, sinfully sexy—and completely out of Juliana Shea’s league. Knowing she’d never survive a repeat of her last disastrous relationship, she parks Tanner firmly in the friend zone. But man, he’s hard to resist.

Juliana is exactly what Tanner wants, and he’s determined to win her over with his kindness and humor… But one night—a night he can’t even remember—threatens to take it all away.

With the flick of a “send” button, their hope for a future together is shattered. But Tanner isn’t the type to give up on what he wants—and he wants Juliana.

Although my college years are long gone, I remember those years with all the life questions and decisions that had to be made and the drama… Trusting Tanner is the first book in the new ‘the Collins Brothers Series’ by Lexi Lawton. It’s the story of Juliana and Tanner, who meet at college and gradually fall in love. I like their story.

“Do I have to?” “Do you have to what?” Slowly, she turned on her stool and faced him. Her big brown eyes were unreadable, but they were breathtaking. Damn, he never knew eyes could be so sexy. “Call you Jules? Maybe I want to call you Juliana.” “Why?”

Juliana is back for a new year at college. Last year has been difficult; she felt lonely and her boyfriend turned out to be a total douche bag. This year, she’s looking for peaceful and quiet, but the moment she meets her new roommate Rebecca, Juliana knows that will be difficult. Like Juliana, Tanner is a bit done with the party-hardy campus lifestyle. Yes, he likes the occasional party, but to focus more on his studies he rents an apartment of-campus. Despite his more serious attitude, Tanner is a popular guy with lots of friends and girls who want him. When Juliana and Tanner get teamed-up in one of their classes, it’s inevitable they start to have feelings for each other.

“My treat.” She glanced up to find Tanner standing next to her, smiling. Where the hell did he come from? Her heart raced, and she licked her lips. “You really didn’t have to do that.” “I know. I wanted to.”

After her last relationship ended with a lot of drama, Juliana has sworn off guys. She just wants to do her thing and spend some time with her best friend Devon. The moment she sees Tanner, she’s drawn to him, but she also sees he’s Mr. Popular with written potential heartbreak all over him. So when they’re paired up at one of their classes, Juliana firmly plants Tanner in the friendzone. Tanner is a persistent guy who knows what he wants and who he wants, in this case the beautiful, sweet Juliana. Because of her experience with guys he knows he really has to win her over, but Tanner knows she’s worth it. After some dancing around each other and some drama they have a shot at something real.

Trusting Tanner is a typical college love story with all the usual characters; the sweet heroine, the popular hero, the heroine’s male best friend (is he into the heroine or not?) and the skanky villain. In my country, we don’t have the campus lifestyle, so sometimes I like to read about all the college drama that you get with so many young people living together away from their parents. I understand Juliana’s issues with guys, but sometimes I wanted to shake some sense into her; Not Every Guy is your Ex, sweetie! And Tanner? I really like that despite his popularity, he isn’t the usual college manwhore.

“I. Love. You.” He punctuated each word with a kiss to her neck until he found her lips once more. Juliana gently scraped her fingernails along his nape, and he shivered. “I love you,” she whispered.

I like Juliana and Tanner. I give Trusting Tanner 4 stars. 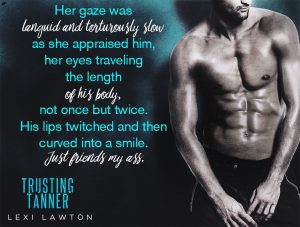 Heart racing, she straddled him. His stomach clenched slightly, and his eyes darkened, but he didn’t move. He lay exactly as he had been, and he watched her. Was it possible to orgasm from a look? Because she was damn close to the edge. “You’re going to be a great doctor.” She rested her hands on his abs.

“Because you have a way of calming people. You can’t teach that kind of bedside manner.”

“Is that so?” He moved his hand from his chest to her thigh, rubbing his fingers in swirly motions, which were anything but innocent. Sensations ricocheted inside her.

“Mm-hmm. You’re also ridiculously hot.” She eased the hem of his shirt up until her hands found bare skin. “Seriously. How does anyone get a body like this?” It was absolute perfection.

She tilted her head. “You do?” Of course he did. She felt sort of foolish for not knowing that.

“What does any of that have to do with me being a good doctor?” His hand moved up her thigh, his thumb coming dangerously close to her sex.

She held her breath, waiting to see if he’d touch her. When he didn’t, she exhaled slowly, trying—and failing—to ignore the intense throbbing between her legs. “Because your residency will be like a real-life version of Grey’s Anatomy. The female doctors and nurses will be all over you. They’ll probably nickname you Dr. McSexy Abs.”

He roared with laughter, and it vibrated through her in all the right places. She bit on her lip to keep from moaning. But she couldn’t stop herself from pressing down on him, letting his length settle snuggly between her thighs.

“Dr. McSexy Abs, huh?” His eyes danced with amused delight, stealing her breath and turning her bones to mush. It was a damn miracle she was able to sit upright. But that look right there, that’s how she wanted him to always look at her. With honesty and desire and respect. Like she was the only woman in the world.

“Yup. There will be more hooking up than healing patients.”

“Oh really?” He propped himself on his elbows, bringing his torso upright and his face within inches of hers. His stomach muscles rippled and tightened beneath her palms, and she dragged her hands up over his pecs and hard nipples, causing him to groan. An unexpected zap of pleasure shot straight to her core. “Wanna know a secret?” he whispered in a deep, raspy bedroom voice.