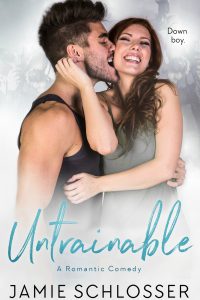 It doesn’t take much to become the laughing stock of reality television. Just ask Theodore “Theo-Dog” Legend. Once you’ve pissed on a fire hydrant in front of the paparazzi, no one ever lets you forget it.

Hadley Holiday is on her way to being America’s sweetheart, thanks to her dog training routine on a national talent show. Although she didn’t win first prize, she snagged Theo’s attention and he’ll do just about anything to make her his—even if it means being the butt of everyone’s joke once again.

Hadley wants a career in showbiz. Theo needs to get rid of that doggone nickname—pun intended. Pairing the two together on a new show sounds like a disaster waiting to happen... or it could be the best thing that’s ever happened to them.

When you watch a reality show, do you always wonder if it’s all staged, and that all the people are just actors playing a role? Untrainable tells the story of reality bad boy Theo, who just can’t stay out of trouble (but wants to turn his life around) and sweetheart Hadley. I love Theo and Hadley together, they are a swoon-worthy couple.

“Hadley and I could become friends. I could look, but I couldn’t touch. Resisting my feelings was going to be a special kind of hell, but I’d try my best not to pursue anything with her.”

To the outside world Theo is famous for being part of a reality show. And of course, his badass/idiotic behavior which somehow is always noticed by the paparazzi. Looking for a new job opportunity and chance to redeem himself a bit, Theo comes up with the idea for a new show… In which he will learn to stay out of trouble with the help of a dog trainer (did I mention Theo is known as Theo-Dog)? Enter Hadley, sweetheart through and through, and who happens to be a dog trainer. Theo and Hadley try to keep it professional but fail miserably (in a total fun and sweet way).

“No one had ever looked at me that way before. Like he was a starving man and I was the last snack on earth. Unfortunately, I wasn’t on the menu.”

Oh oh Theo, what to make of you. Part of him is a crazy guy without any manners who does all kinds of stupid things. But there’s also another Theo, and I feel so sorry for that little boy. The bad boy is his mask, underneath there’s a hurt man who’s still affected by his childhood. Hadley is finding her way; she knows a 9 till 5 job isn’t for her, and dogs are just her passion. It’s hard for Hadley and Theo to deny the chemistry between them, and it’s cute to see bad boy Theo go down the way he does.

Untrainable is a cute romantic comedy about two young people falling in love. It’s also about the weird world of reality tv and all what comes with it. Not everything is what it seems, sometimes it’s even the complete opposite of what you see. I’ve really enjoyed this story, Theo and Handley put a big smile on my face.

“You’re my hero.” “No.” I dropped a kiss to her forehead, returning with the same response I always gave when she said that. “You’re mine.” 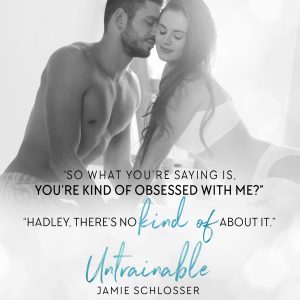 “Okay. Change of plans—pie first, cleaning later. I get weepy when I’m hanky.”

“Hanky?” Theo followed me to the kitchen.

“It’s a portmanteau.” Walking over to the table, I removed the foil from the dish. Steam billowed up, carrying the heavenly scent of apples and cinnamon with it.

“I’m sorry, a what?” Sounding utterly confused, Theo went over to a small white coffee maker next to the sink and punched a button. It sputtered for a few seconds before the aroma filled the room.

He grabbed two mismatching mugs from the cabinet. Setting them down, he leaned back against the counter while he waited for me to explain.

“Blending two words to make one,” I said. “Hungry and cranky equals hanky.”

“It’s kinda like my nickname, huh? Putting Theodore and dog together.”

“Yeah, kind of like that.” I grimaced because he obviously wasn’t a fan of the combination. “I’m sure whoever came up with that thought they were being very clever.”

“They probably got promoted.”

“Well, I’m feeling mighty humpy myself.” When he said the word ‘humpy’, I could’ve sworn I saw his pelvis do a slight thrust.

I almost fell over. “Excuse me?”

He sent me a grin that did funny things to my stomach. “Portmanteau. Hungry and grumpy. Humpy.”

That was inappropriate but also correct. I couldn’t knock him for coming up with his own word, even if it did draw my attention to his groin.

I tried to force myself to look away from his lower half, but it was really difficult.

Because now that I wasn’t scrutinizing his living quarters, my thoughts went elsewhere: straight to the gutter.

The gray fabric of his pants stretched over his crotch, and he probably wasn’t wearing underwear because I could see a very distinct outline of his dick.

I didn’t mean to stare at it, but it was just right there. Out in the open. And alarmingly large. It was like spotting a rare animal in the wild. The thing practically needed its own Australian accented voiceover.

Inexperienced as I was when it came to actual sex, I wasn’t completely innocent. I knew what a semi-erect penis looked like. The length of it rested against his thigh and the definition of the thick head was impressive.

“Hey.” Theo’s voice startled me, and my eyes snapped up to his.

My cheeks were on fire. I’d been caught, and I wanted nothing more than to sink under the table and hide.

“Hi,” I squeaked, lowering myself into the chair.

Well, that wasn’t what I’d expected him to say, but it was a lot better than him calling me out for eye-balling his junk.

“Deal,” I responded. Then for my own benefit, I added the reminder, “I’m looking forward to being coworkers and friends.”

His left eyebrow arched on the word ‘friends.’

Dang it. Maybe he did see me checking him out after all.

For the sake of my sanity, I really hoped he was planning to wear jeans for the show. And maybe some underwear with crotch-confining support. Like a girdle, but for penises.