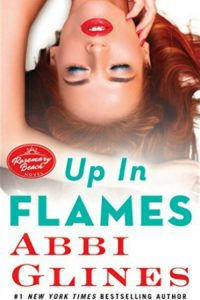 As the Prada-clad bad girl of Rosemary Beach, Nan Dillon has been called every vile name under the hot summer sun. Some of her reputation is deserved—she’s never had to worry about anything but maintaining her perfect figure and splitting Daddy’s private jet with her brother, Rush.

But Nan is far from happy. Rush has another kid on the way and doesn’t have time to catch up with his sister. Grant, the last guy she truly cared about, chose to be with her half-sister, Harlow, instead of her. And Harlow, who has never gotten over the way Nan treated her when she first moved to town, remains distant.

So when Major asks her out, she jumps at the chance to date the gorgeous charmer. Though she doesn’t know much about the sweet-talking Texan, and though it’s clear he doesn’t want to be exclusive, dating him beats hanging out with vapid socialites or watching Netflix alone at home.

For a while, Nan deals with Major’s playboy ways, but after he burns her one too many times, she takes off for an impromptu wild weekend in Vegas. There, she meets Gannon, a darkly seductive and oh-so-dangerous businessman who knows exactly how to handle her.

With Major asking for a second chance and Gannon haunting her dreams, Nan has to decide who to give her heart to. But what she doesn’t realize is that these players are involved in a much bigger game—and they’re already two moves ahead of her.

For some reason I just love a good villain in my romance books; their words, reasoning and actions intrigue me. One of my favorite female villains is Nan Dillon from ‘the Rosemary Beach series’ by Abbi Glines. Throughout the series Nan is the beautiful, cold-hearted bitch who takes what she wants without thinking about the feelings of the people around her. In the last few books this ice-y armor began showing some cracks, Up In Flames finally gives us Nan’s own story.

Nan has grown up with a mother who was more interested in dating famous rockstars and the party lifestyle, than spending her time with her children. While her half-brother Rush has a father figure in his life, Nan only has her indifferent mother. From an early age she has learned she doesn’t matter, that she isn’t enough. The only person who cares for her and loves her for who she is, is Rush. But when he meets the love of his life he can’t be there for her as much as he used to, something that really hurts her. And a hurt Nan lashes out, in the cold way she has perfected since childhood; don’t show your emotions and pain. But Nan is done, she wants to be somebody’s special person, to feel loved like other women she knows.

“I wanted to be someone’s Harlow. Or Blaire. But I’d always just be Nan. And Nan wasn’t enough. I never had been, and I was done trying to be.”

Men are a part of Nan’s life, she loves the attention and the way they make her feel. But the superficial flings aren’t enough anymore; Nan is done with being seen as ‘the Rockstar’s kid’, as ‘money’. She wants somebody who wants to be with her, just her, and is not with her for the money or the fame. Lately, she spends a lot of time with player Major, who we know through the previous books in the series. And she wants more from him then what he has to offer. While on the run for a persistent Major, Nan meets the mysterious Gannon. He makes Nan feel special and cherished, and although she knows Gannon can shatter her, she gives into her feelings for the first time.

“I was strong. I was self-sufficient. I was going to be OK.”

I didn’t like Nan in the previous Rosemary Beach books. She was an immature, selfish bitch who only cared about herself, and about her half-brother Rush. Her actions said a lot about her; she was only interested in Nan and how she could benefit from situations. But in the last few books there were glimpses of a little less evil Nan, and in Up In Flames finally the real Nan is shown. And I feel sorry for that Nan. All she has ever learned is she isn’t good enough, not worthy of being loved, to be the number one in somebody’s life. Her need to feel being wanted has led her to bad behavior and stupid decisions, causing the opposite reactions she truly wants. I love the realness of Nan; she knows she has said and done horrible things, but she doesn’t make excuses for them. She wants to be a better person, and I’m so happy for her she gets that chance.

“He found beauty in it. In me. When no one else had ever done that. He was my gift in this world. My one stroke of luck. Sure, he was screwed up and possibly insane, but so was I. We fit perfectly. A match, just like he said.”

Although Nan still isn’t my best friend, I love her story and the ending she gets. I give Up In Flames 4.5 stars.

~~ Up In Flames was provided in exchange for an honest review ~~