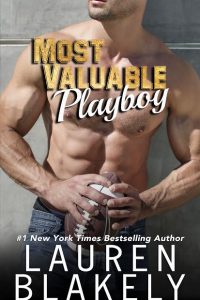 Hands down, my favorite thing in the world is to score. Touchdowns.

Don't let the fact that I'm the leading pick in the Most Valuable Playboy charity auction fool you. These days, I'm only a player on the field. I've kept my pants zipped all season long -- and it has been long -- because nothing's more important than leading my team to victory every week. Except maybe escaping from the team owner's recently-widowed and handsy-as-hell sister who's dead set on winning more than a date with me.

She's my best friend's sister with a smile as sweet as cherry pie and a mind that runs quicker than the 40-yard-dash. After Violet saves the day with the highest bid, I don't even give her a two-minute warning before I kiss her in front of the whole crowd and then announce that she's my girlfriend. Which would be fine except my agent tells me we have to keep up the act while he's negotiating my contract.
Violet takes one for the team and pretends to be mine, but our boyfriend-girlfriend scrimmage quickly turns into a full contact sport, and I want it to go into overtime. The problem is -- I've been riding the bench for years.

How can a guy like me, who finally has a chance to prove his worth on the field, convince the girl she’s most valuable to his heart?

MOST VALUABLE PLAYBOY is a brand new standalone sports romance written in the guy’s POV!

Cooper and Violet know each other for a long time, and are close friends. But in Most Valuable Playboy – Lauren Blakely’s latest book – their friendship starts to change… I love a good from-friends-to-lovers story, and that’s what this book is. A sweet, sexy sports romance told through Cooper’s eyes, I love it!

“I’m an everything woman.” She lets that comment hang between us, and for a moment, my head is in a fog. Everything. What sort of everything does Violet Pierson like? Everything in bed? And why the hell am I thinking these thoughts about her?”

After having spent a couple of years on the bench, it’s finally Cooper’s time to shine as the Renegades quarterback. He used to be pretty much the team’s playboy, but now he wants to focus on the game and his career. When he needs a bit of a rescue, he turns to Violet, his close friend who also happens to be his best friend’s little sister. Very off-limits… But it’s like suddenly he sees her (and she him) in a totally different light. Sparkles fly and soon their conversations are not so ‘friendly’ anymore.

“Hell, this girl can act. The problem is my dick is a method actor. Because this should just be an ordinary staged kiss. But he’s gone rogue. The idiot between my legs is malfunctioning, pointing at the wrong person in an absolutely inappropriate manner.”

Most Valuable Playboy is a typical Lauren Blakely story written from the guy’s POV. The hero is a guy you just have to love and the object of his affection is a woman you want as a friend. While the storyline could have taken the road for lots of drama, it stayed sweet, funny and light. Throughout the story characters from previous books make their appearance, and hints are given for future books, I like it!

I have to be honest, I expected a wee bit different story, but I ended up loving Most Valuable Playboy. I guess I expected a bit more drama from the best-friends-little-sister angle, but it wasn’t like that at all. I love Cooper and Violet together. They know each other so well, only the relationship aspect is what’s changing between them. I love their ‘pretend’ relationship, and how both start to realize what they are to each other; The One.

“I love you so much.” “Shut up,” she says, but she’s grinning. “You want me to stop talking?” “Never, but you’re crazy,” she says, sniffling as she cups my cheeks. “You’re so crazy, and I’m so in love with you, and you better have meant every word.” I laugh, and happiness floods every corner of my body. “Every. Single. Word.”

I love Cooper, Violet and their story, I give Most Valuable Playboy 4 stars. 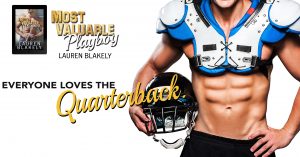 Maxine’s eyes laser in on me, and she slashes an arm through the air. “Five thousand dollars,” she says, jacking the price up by nine hundred and staking her claim. I shudder inside.

My stomach plummets when the business woman shakes her head.

“Going once?” Sierra asks, scanning the tables, looking for perhaps one last big spender. My eyes scan the crowd, too. Hell, maybe I’ll find an escape hatch. A trapdoor to drop into and disappear like in a magic act. Maybe Trent will learn to read my mind. Trent, I’ll cover you for anything you bid. Just raise that hand, name a price, and save me.

My best friend’s expression is merely curious now as he watches Maxine and Sierra, waiting for the verdict. My opportunity to play yard boy slips through my fingers.

A flash of chestnut brown hair in the back catches my attention. A flurry of silver. It’s Violet, hands in the air, wildly flapping over her head in the middle of the ballroom. She brings her finger to her nose. And she’s tapping it, like fucking Santa Claus coming down the chimney, and Harlan tapping his nose to signal his agent, and all the greatest solutions in the universe at once.

It hammers in my chest. This is like finding an open receiver a second before you’re sacked.

“Going twice,” Sierra says, trailing off as she waits.

Holy shit. Violet does not mess around with my money. Her eyes widen, as if she’s surprised she bid that high.

My gaze finds Trent. He’s staring at his sister, slack-jawed.

Sierra’s smile is bright and wide. “Ten thousand dollars. Do we have ten thousand, one hundred?”

The room is hushed. Maxine’s expression is blank. She must be shocked. She probably didn’t expect anyone to vie with her to this extent.

I say a silent prayer. I cross my fingers. I hope.

Maxine blinks, opens her mouth, and I steel myself for a disgustingly high counter bid.

But there’s only silence. No words come. Violet has shocked her speechless. This type of bid wasn’t in Maxine’s playbook.

Sierra raises her arm. “And a night with the quarterback is sold for ten thousand dollars.”

Talk about a Hail Mary.