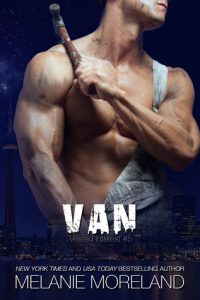 Vince Morrison, known to most people as Van.

Good with his hands, be it crafting a piece of wood, playing his guitar, or pleasing a lover—he excels at them all.

Friendly, flirty, and talented, he’s cool under pressure, and hot everywhere else.

But he keeps his heart closed, even as his interest and emotions are tested.

Olivia Rourke works alongside him at BAM.

Talented, private, and intriguing, she touches something inside him he can’t deny.

He wants to know her. In every possible way.

He wants her to know him.

Her past tells her to stay clear. Van is everything that she wants, and exactly what she cannot have. She has someone else to think of who is more important.

Can either of them risk their hearts?

Two people with their hearts broken before, can they get past the demons of their past and fall in love? Van tells the charming story of Van and his Liv. I love this sweet addition to the ‘Vested Interest Series’, it made me giggle and swoon at times.

“She had been on my mind all night. Why I had no idea, but for some reason, the past couple of months, she’d slipped into my thoughts more than I cared to admit.”

Van is a hardworking, trustworthy guy. He’s been with BAM for some time now, and he loves his work. While he’s good with wood and dealing with clients, Van’s love life is not so good. He has been hurt in the past, and as a result he keeps away from women. Keeping away from his colleague Liv however is not possible. The sweet, shy woman awakens a lot of feelings in him, and he can’t ignore them. But, like himself, Liv doesn’t have a good track record with men. She wants to keep Van at bay, but she too can’t resist the gentle giant.

“Van made me happy. Were we more attached than I realized, as I had thought earlier? I thought, perhaps, I had my answer.”

Van and Liv, just swoon. Both are so lovable, but both think they’re not worthy of somebody to lean on, not worthy of love. They’re lonely souls, who bury themselves into work, keeping other people at a safe distance. But both are worth so much more, they deserve to find their One. My heart hurts for Van, what happened to him was horrible. I just want to hug Liv and tell her not all men are bad. Van and Liv together? I love them, they are perfect for each other.

Van is book 5 in the ‘Vested Interest Series’ and takes the reader back to the world of BAM. But this time, we’re not in the boardrooms. We get to see the craftsmen and -women who make BAM the success it is. Like in other books by Melanie Moreland, most of the story is told from the Hero’s POV, and Van is no different. Van is a sweet man, who deserves the love of a sweet woman. And in Liv, he finds everything.

“Love filled our hearts. It was my dream brought to life. I met Liv’s gaze, her beautiful eyes soft with emotion. She was my dream.” 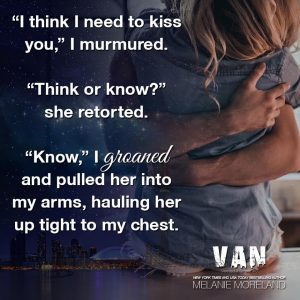