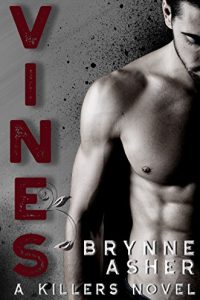 In the Virginia countryside outside of Washington, DC, Addy Wentworth was on a mission to make a new life for herself. When the opportunity arose, she settled in horse and wine country. Experiencing more than her fair share of tragedy and loss, she had plans for her future, one where failure wasn’t an option. And not just because people and cows were counting on her. She’d poured everything she had into her struggling vineyard, because once she’s in, she’s all in.

After giving himself wholly to the job for ten years, Crew Vega was done. He’d fulfilled his commitment, done his duty, gone above and beyond to settle the score. And the score was high. All he had to do was train his replacements and he’d be out for good.

He had a plan, one that didn’t include getting involved with his new neighbor, a woman who not only kept cows for pets, but treasured her employees as family, and understood him better than anyone ever had before. But when he learned a high level CIA target being investigated for treason was keeping tabs on her?

No, he never planned on that.

And like everything Crew Vega did in life, when he goes in, he’s all in.

It has been more than a year since one of my favorite authors has published a new book, but with Vines, Brynne Asher is back. Vines is the first book in the author’s new series, ‘Killers’, and tells the story of Addy and Crew. I love their story, and the promise of the future books.

“Certain moments in life become etched in your soul. For me, I have merely a handful. Buried deep, they’re entwined, tangled, and even disheveled. Living together forever, they create who we are and how we see the world. More so, how we react to it, even live within it.”

After the death of her mother, Addy does something not everybody will do; she buys a company with potential from incompetent owners. To be more accurate; a vineyard in the countryside of Virginia. Her mother was the only family Addy had, her father died when she was still a young girl. So, moving after her mother’s passing is more than a new house and job, it’s building an entire new life. Even though Addy has the help from employees who came with the vineyard, learning how to run it is hard work. Relationships and even casual dating aren’t even on her mind right now. But for some reason, she thinks more about her mysterious neighbor – Crew – than she cares to admit.

“Who are you?” I clip, putting space between us.” “Your neighbor.” Oh, thank goodness. I let out a breath of relief. I don’t care if he is tall, dark, and gorgeous, he’s a tad scary looking. Plus, I feel like he snuck up on me. I’m glad to know he’s my neighbor and not a creepy trespasser.”

Crew Vega has left his secretive military job after ten years. He has seen and done things that change a man forever. But before Crew can leave, all he has to do is training his replacements, the men who are going to take over his job. The quiet countryside of Virginia provides him with the space and buildings needed for the training, but Crew didn’t count on having a vineyard right next to his land. And the distraction of owner of said vineyard and her pets? It isn’t the time and the place to fall for a woman.

“Addison,” I call as she reaches for her door. When she turns, I drag my eyes up from her ass to her eyes. “Nice dress.” Now I’ve pissed her off because she hitches a foot, putting a hand to her curvy hip. “No one calls me Addison. It’s ‘Addy.”

When Crew and Addy meet, there aren’t any sparks flying. Both are annoyed; Addy for having to go after her cow pet, Crew because there are ‘intruders’ on his property. But being neighbors means they meet again.. And again.. Slowly Addy and Crew start to act friendly and both have to admit the other one is on their mind, a lot. When the couple finally gets together is hot and explosive.. Powerful outside forces are trying to get to Addy, but It’s a given fact Crew and Addy are meant to get a Happily Ever After.

As already said, Vines is the first book in a new series. A new series means a whole new ‘world’, and the author did a great job with building a setting so different from her previous ‘Carpino series’. Also, in a first book a lot of characters are introduced besides the main couple, people who will get their story told in future books. Crew and Addy, the main characters from Vines, are great, realistic people. Addy is a woman who knows what she wants, and Crew is a bit of a protective Alpha who wants to keep Addy safe.

“You’re done?” He leans in and kisses one of my tears away, whispering, “Done, baby.” I’m so relieved, I don’t even know what to say, so I bury my face in his neck. His hand comes to the back of my head and gently pulls. He’s blurry from my tears, but I can hear him clear as a bright, sunny day. “Love you, too, my Abby.”

I love Vines, I give the story of Addy and Crew 4.5 stars.