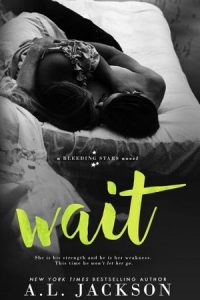 She is his strength and he is her weakness. And this time he won’t let her go.

Edie Evans is gorgeous.
Sexy.
Kind.
She’s also the definition of off-limits.
But that didn’t stop me from sneaking into her room to comfort her at night.
But guys like me? We destroy everything, so it should have been no surprise when I destroyed us, too.
The night I sent her running, I thought I’d never see her again.
Until I saw her standing like a vision in the crowd.


Austin Stone is dangerous.
Alluring.
Tempting.
He broke my heart and I refused to give him the chance to do it again.
It’s been years since I’ve seen him, and now I can’t do anything but stare at the gorgeous, tattooed man playing onstage. I should run. I know I should. But like a fool, I run straight back to him.
Our desire is overpowering.
Our need unrelenting.

She is my hope.
He is my weakness.
We should have known a passion this intense would burn us right into the ground.

“That was my cue. I had to get out of there. Protect myself the only way I knew how. I turned and ran. Because running was what I did best.”

Edie is going through the motions of life, she has some good friends and a job she likes. But under the surface there’s a world of hurt and buried feelings. Being forced to grow up at a young age and being told to never tell anyone what has happened to her has changed Edie in every way. Gone is the happy, cheerful girl and nightmares have taken over her dreams. When she met Austin, Edie finally felt safe for the first time in years. For some time, she and Austin where very close friends, until he did the unthinkable. When she sees him four years later, she doesn’t know what to think or feel anymore.

“Austin stood at the end of the walkway, just outside the reach of the lights, his body obscured in shadows. Even larger than I’d imagined when I’d first seen him up on stage. So foreign. So familiar. My heart ached.”

Austin is a traveling artist who plays his gig wherever he can to earn some money. While he seemingly has it all – a good family, a real talent and support – the death of his twin brother and losing Edie are still haunting him. When Austin met Edie in his late teens he saw a kindred spirit, someone who was hurting just like him. When he sees her again after four years, he knows he can’t let her get away again, that she’s the one for him.

“I swore I could see directly into her soul. It seemed that hungry gaze had no place else to settle because she couldn’t look away. Just like me. Because God. This girl was the only thing I could see.”

When Edie and Austin meet as teenagers they form a very close and special friendship. Both know about hurt and lose, but Austin and Edie find out they make the other one feel better. When they see each other unexpectedly after four long years, all the hurt feelings and lost dreams come crashing back in. The bond between the couple is undeniable, but Edie still feels very hurt by Austin’s actions back in the day. She knows she loves him, but she’s afraid she can’t trust him anymore. The moment Austin lays his eyes on Edie, all he wants is to repair their broken friendship, and to make it so much more.

Wait is a beautiful written book about deep friendship, love and coming to terms with the past. My heart broke for Edie; what she went through was horrible. But what made it worse in my eyes, was to keep it a big secret, something to not tell a soul. This is a way too heavy burden to carry alone, with the support of her loved ones she could have given it a place instead of letting it dictate her life and dreams. I love how Austin is with her, sweet and very caring. The moment they meet again Edie is all he thinks about, and he leaves his past behind without any regret. One tiny rant; what was Ash thinking when he took his little sister to a grownup party and left her unsupervised… Idiotic brother.. Rant over.

Although Wait was a bit sad at times, I’ve enjoyed reading it very much. I give this story 4 stars.

~~ Wait was provided in exchange for an honest review ~~ 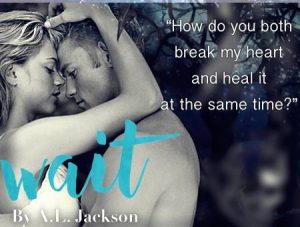 Shit,” I hissed, bracing myself against the spray of the icy shards pelting from the shower head.

I sucked in a breath, released it between clenched teeth, and forced myself fully under it.

Head dropped and chest heaving as rivers of ice-cold water slicked down my shoulders and back.

But it did nothing to lessen the need. Gave me no sanity or pacification.

Because all I could think about was the girl on the other side of the door.

Wearing just her panties and my shirt.

An angel I wanted to dirty.

All of my restraint scattered. I gripped my cock. Squeezed the base. My mouth dropped open at the pressure of my hand against my rigid length.

God, I was a bastard, but there was nothing I could do before I was giving in, leaning forward and bracketing my forearm above my head to hold my weight.

Water pounded down on my head and back while I pounded my fist against my dick.

Trying to keep silent when all I wanted was to moan, teeth digging into my bottom lip as I pictured the girl spread out for me.

My breaths were coming short.

I gave into imagining the sounds she would make when I finally got to bury myself in her body.

I slowed, trying to convince myself that throaty sound was all in my mind.

Just another part of this fantasy.

Until I heard the small thump against the wall.

Conceal the depravity of my actions after I’d just been comforting her hours before.

Heart thrashing, I turned and moved far enough to peek out the small section where the fabric shower curtain hadn’t been drawn fully closed.

It was just a little sliver that left me exposed.

But it was enough. When I peered out, I was looking right at my girl pressed up against the wall.

She stared right back at me.

And I wanted to be horrified, my mind scrambling to conjure every weak apology I could summon. Ready to fucking grovel to keep her from turning and running once again.

Because that’s exactly what I expected her to do.

But her expression…her expression clutched me in the center of the chest and sent what little brain function I had left stampeding south.

Red, lush lips were parted, her hand pressed to her hollow of her throat, pupils dilated so big that her hooded, cerulean eyes appeared black. Needy breaths were coming at me from that sweet mouth like a goddamned freight train.

Desire swelled in the confines of the too-tight room.

She pressed deeper into the wall as if it might support her weakened knees. Head rocked back. Thighs squeezing together.

My hand shot to the shower wall to steady myself. “Warning you, Edie, you need to get out of here. Right now.”