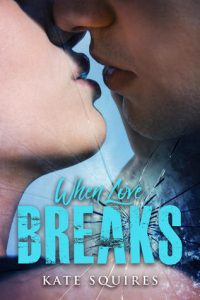 Elora Foster and Logan Turner never met, until the day she showed up on his doorstep. After a simple, chance encounter, the two embark on a journey that will change both their lives forever.

With good intentions and a heart of gold, Elora has aspirations of being a nurse. But, when she’s hired to take care of Logan, a double amputee, she’s instantly put off by his grouchy demeanor and bad attitude. She’s not sure if taking this job was the right move, or the worst decision of her life.

Logan, who was recently released from the hospital, has no intention of letting anyone take care of him. He’s sure there’s nothing that could change his hopeless situation, so he resigns himself to his fate. When he meets Elora, instant friction begins, but soon, he realizes there's something different about her. Try as he might to behave himself, he finds that his negative attitude upsets her frequently—and to his surprise, it bothers him.

As time moves on, the two become more acquainted, and strong feelings begin to grow, but a road block threatens to derail any relationship that might develop. Just when they think they’ve found a way around it, their lives take a turn for the worse, and they're both faced with a gut wrenching decision which has the potential to tear them apart.

Can she save this lost soul? Can he get over the past enough to see she’s the one? Can they work through the worst problem they’ve ever known, or will the strain be too much?

“What did you say?” “Who me?” I say innocently while looking around behind me. “I didn’t say a thing.” I smile sweetly at him as he stares at me for a few more seconds. It’s almost as if he’s trying to read my mind.”

Elora is a young, sweet woman who works as a home health aide, taking care of all kinds of people. While she enjoys her work as an aide, Elora wants more and is studying to become a nurse. Elora isn’t very close with her mother, but she does share her apartment with her brother Daniel. When she starts working for a new client – Logan – Elora slowly begins to fall for him, she tries to fight it, but she can’t deny her feelings for him.

“You don’t have to. I’m more than capable of—” “I know. Just let me do it,” he interrupts. Then, our eyes meet, and I notice the sincerity in his offer. His eyes, God, his eyes, they’re mesmerizing. I could easily get lost in them.”

Logan is going through a hard time. When he wakes up from a coma, the former military medic discovers an accident have taken both of his legs, leaving him in a wheelchair. Angry with the world Logan refuses all sorts of help, from home health aides arranged by his brother Michael to wearing his prosthetics. His latest home aide however sees through his angry mask and he likes having her around. It doesn’t take long before he starts to see Elora as much more.

“If she’s smart, she’ll never agree to come back. But, somewhere inside me, hope springs. What is it about her that feels different? She’s beautiful. Actually, she’s more than beautiful, but she’s kind too.”

After a somewhat grumpy start Elora and Logan form a friendly work relation; Elora helps Logan to make his new life in a wheelchair easier and Logan learns to let go of his anger. Since they spend a lot of time together during the week Elora and Logan get to know each other very well and soon they realize they care more about the other one then is appropriate. Elora knows getting involved with a client is not done, and she tries to stay away from Logan. But, with this being a romance novel you know this won’t work. Logan and Elora are a sweet and good couple and they deserve a Happily Ever After.

When Love Breaks is my first book by Kate Squires and I really like it. Lately I’ve read some pretty twisted and dark books; When Love Breaks is a very welcome break. The book is a sweet read with a little twist which makes the story not too sweet. The book not only tells the story of two people meeting each other and falling in love, but also the story of a man coming to terms with a life without his legs. I love the main characters, Elora and Logan; they are normal people with realistic thoughts and reactions.

“None of us are innocent. The good thing is that we’ll all be okay in the end.” I smile at her and take her face in my hands. “I love you, Elora. I always will.”

I’ve enjoyed reading When Love Breaks, I give this story 4 stars. Will I read other books by Kate Squires? Yes, I definitely will!

~~  When Love Breaks was provided in exchange for an honest review ~~ 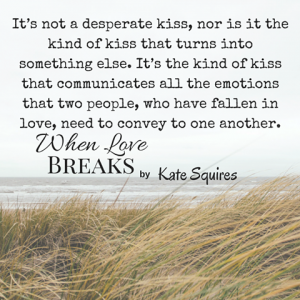