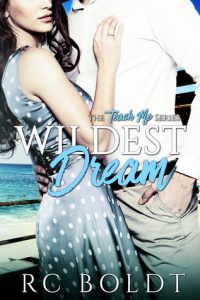 The Teach Me series starts off with the story of Raine and Mac, the most unlikely of best friends…

Taken from his parents and bounced from one foster home to the next, former Navy SEAL turned math teacher, Callum “Mac” Mackenzie had a rough childhood. The only time he’s let himself get attached to anyone has been with his military “brothers”. He’s convinced he doesn’t know how to love and certainly doesn’t “do” relationships. He’s spent fourteen years in the Navy and now he gets to live out his other dream: teaching.

Her thirtieth birthday fast approaching, science teacher, Raine Thompson feels as if her time to find “the one” is running out. She knows life is short, especially after dealing with breast cancer two years ago, and wants to experience her own happily ever after. But is it in the cards for her?

Finally acting on the simmering attraction they have long ignored, Raine and Mac decide to have a fling and they discover what it’s like to have someone who knows you inside out also be the one who makes your body come alive.

But it was only temporary…

“No, Laney,” she shook her head at her friend. “But you haven’t even heard me out!” Laney complained. “He’s really nice, Raine.” “Do you remember what happened the last time you set me up with someone you claimed was ‘really nice’?”

Raine is a young woman who works as a school teacher. Although some parents can be difficult, she loves to teach children and to interact with them. She and a few of her coworkers are friends outside the school, and off-work they spend a lot of time together. In the love department Raine isn’t very lucky, she meets the weirdest men. And when she finally thinks she has found a man with the possibility of something real, he turns out to be the biggest frog of them all. New colleague Mac feels ‘right’ the moment she meets him, but Raine firmly places him in the friend-zone.

“When his hand grasped hers, feeling his firm, callused fingers, she swore she felt like their hands just . . . fit. Aaaand she clearly needed to get out more if she was beginning to analyze handshakes.”

Mac is a former Navy man who has left the service and now starts working as a math teacher. The Navy has been his life for a long time, but an incident in Afghanistan has made him re-think his direction in live. Mac isn’t interested in a relationship, but he does spend ‘social time’ with women who know the score; casual and no expectations. The moment he meets Raine during his first day at school he feels a click with her, but he immediately dismisses her a too sweet, too nice.

“They actually seem pretty great to me.” That wide, stunning smile of hers came out and she turned an affectionate gaze toward her friends. “That they are,” she remarked softly. Mac swore he could still feel the warmth of that smile even minutes later.”

Having put each other in the friend-zone, Mac and Raine spend time together as colleagues and as friends. Both are dating other people, but seeing the other one with another person makes them feel off. When both Raine and Mac finally can’t deny their feelings anymore, they agree to spend time together. Given Mac’s fear for relationships they keep it hidden for their mutual friends and agree it won’t affect their friendship. But, since this being a romance novel you can guess it won’t work out as planned. After a lot of secrecy, hurt feelings and some people coming to their senses, Mac and Raine have a shot at something real.

Wildest Dream is RC Boldt’s debut book. After I got used to her writing style I’ve enjoyed this book; I like the characters and their bumpy road to a relationship. Since this is the first book in a series, a lot of people are introduced (and some are related), and sometimes that was a bit much. Also, I wish Mac realized Raine was the woman for him a bit sooner. She didn’t deserve to be treated as a secret; she deserved so much more. I wish I had seen more of them as a real couple, out in the open.

“Is that right?” “Yep. Because, Mac . . .” she trailed off as she leaned closer, tilting her head so her lips were just a breath away from his. “Yeah, Raine?” “You’re definitely the one I want,” she whispered, her lips brushing against his with her words.”

I’ve enjoyed reading Wildest Dream, I give this book 4 stars. I’ll definitely will read the next book in the series.

~~ Wildest Dream was provided in exchange for an honest review ~~