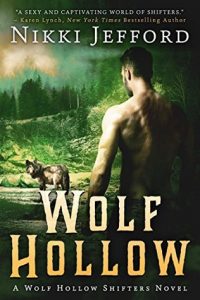 An attraction that threatens the future of the pack…

Spirited, stubborn, and deeply loyal wolf shifter, Sasha feels the pressure from her pack to claim another pureblood, yet no one is brazen enough to defy the elders and toy with her . . . no one besides a hotheaded half-breed.

Tabor, a rebellious outcast, is the hollow's only wizard shifter. Constantly overlooked despite his strengths, Tabor believes Sasha is as shortsighted as the rest of the pack until she proves there's more to her than a blindly obedient lapdog.

Unable to resist the proud and sensual pureblood, Tabor would risk everything to claim her. Despite her vanishing bloodline, Sasha can't resist the charismatic half-breed, even as the elders set her up to breed with another pureblood.

Predators are closing in, threatening the strength and stability of their pack, and there are shifters within Wolf Hollow willing to do anything to prevent the pair from mating.

For some reason I don’t read paranormal romance very often. The ones I’ve read are very over-the-top (especially in the romance department), and I need my romantic stories to be realistic-ish. But I also love to discover new authors, and the blurb of Wolf Hollow intrigued me. I’m very glad I’ve decided to give this story a chance, I love it.

“Why did she feel flustered all of a sudden? Why did Tabor have to stir up all these feelings to begin with?”

Sasha is a wolf shifter, and very loyal to her pack. As a purebred wolf, the elders of the pack want Sasha to mate for securing the pack’s future, but Sasha has mind of her own. She isn’t look for love yet, but mating with another pureblood just for the sake of breeding, that’s not her. Tabor is living with the pack and is barely tolerated. The werewolf/wizard is considered dangerous, and the elders would be happy to see him go. Sasha and Tabor have known each other for a long time and have always been friendly. The sudden spark between them is unsuspected, but Sasha and Tabor don’t mind exploring their feelings for the other one.

“He knew he wanted her—not just in the physical sense. He wanted her as his mate.”

Sasha and Tabor might be shaped by their upbringing and pack life, but they both are strong and independent people, doing what they want. Sasha in more into pack life of course, but Tabor doesn’t let his pack members down, even when they don’t trust him. Instead of following pack rules, Sasha wants to find her own mate, on her own terms. I love Sasha and Tabor together; they are both confident people who know what they want, and who don’t mind the consequences. They both are what the other one needs.

Wolf Hollow is my very first read by Nikki Jefford, and I really like it. The book set in a post-apocalyptic where a disease has whipped out entire cities. It’s not fully explained what has happened, but it isn’t needed for the story. However, it makes me curious for the other books in the series. In most of the paranormal romance I’ve read the bond between mates is over-the-top insane, but in this story Sasha and Tabor have a free will. They love each other and make the decision to be together, they don’t let a primal urge taking over their actions. It’s refreshing to read.