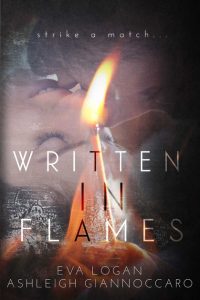 But if they should come
Before the night is done

I pray the lord my heart to save
If the fire my flesh should crave.

The pull of the fire was never something he could ignore. Even now, he barely controls the need to set the entire world alight. His one lover is a flaming seductress that taunts him with her beauty and danger. He couldn’t resist if he tried. Will they all get burned, or will they rise from their ashes?

Delilah brings with her an intruder to his sacred zone. Curiosity has her trespassing upstairs. Her nocturnal neighbor fascinates her, the brooding tenant above her has her enthralled and captivated. She needs to be the one to extinguish his burning needs, but will he have tolerance for her compulsive habits or will he see Red?

Passion is a wildfire which devours everything in its path.
Broken people shouldn’t play with matches.

Can two deeply damaged people fall in love and build a ‘normal’ relationship? Written in Flames tells the story of Nolan and Delilah, who are each trapped in their own kind of hell. The book is a teamwork from Ashleigh Giannoccaro and newbie author Eva Logan. I’ve enjoyed reading this Romantic Suspense story.

“She is more alluring than any fire, her soft skin, and bony figure, you can see how damaged she is below the surface. The way she smiles with only one side of her mouth, and the way her eyes look as if she’s lived a thousand years of war inside her. Delilah is going to destroy me.”

For as long as he can remember, Nolan is consumed by fire. Playing with it, setting things on fire, it’s always on his mind and it’s a craving he can’t escape. Having built his life around his obsession, Nolan stays away from other people as much as he can, but he finds his landlord Delilah intriguing.
Delilah doesn’t have it easy. The family business she has inherited is failing and inside she’s a mess. Her fixations make sure she keeps other people at a safe distance, but when her life start to fall apart, Nolan is there for her.

“I never knew anything, or anyone could make me feel this good. So safe and so protected. No-one has ever looked at me the way Nolan does, he sees me. Not just what he wants to see but what is really there, all of it. Every broken piece of me.”

I have read a number of Ashleigh Giannoccaro’s books already, and Written in Flames is a bit different. That’s not weird, since she has co-written this story with Eva Logan. The book is told in a double POV, giving the reader an insight in Nolan and Delilah. You not only read about the present, but also learn what happened to them, what shaped them into the persons they are today.

Compared to the other books by Ashleigh I’ve read, Written in Flames feels different. Yes, the characters are still disturbed and kind of broken, but the story feels less in your face. While I should condemn Nolan for his ‘job’ and actions, I can’t help to feel sorry for him. Not only for the man he is today, but also for the young boy he was. Delilah… I just want to hug her, to take care of her and tell her everything is going to be okay. She’s so much stronger than she thinks she is. Delilah and Nolan are both damaged, but I love them together.

“He keeps kissing me with intention, he moves with me, finally laying me down in front of the roaring fire, like an offering to his demons. I don’t care because I go willingly. This is where I belong.”

I love Written in Flames, I give the story of Delilah and Nolan 4 stars. 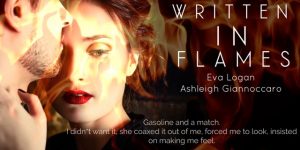