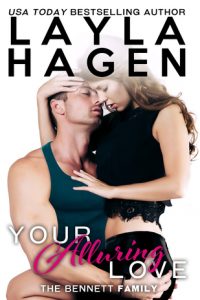 Alice Bennett has been holding a torch for her older brother’s best friend, Nate, for more than a decade. He’s a hotshot TV producer who travels the world, never staying in San Francisco for too long. But now he’s in town and just as tempting as ever… with a bossy streak that makes her weak in the knees and a smile that can melt ice—or at the very least, her defenses.

As a successful restaurant owner, Alice is happy with her life. She loves her business and her family, yet after watching her siblings find their happy ever after, she can’t help feeling lonely sometimes—but that’s only for her to know.

Nate has always had a soft spot for Alice. Despite considering the Bennetts his family, he never could look at her as just his friend’s little sister. She’s a spitfire, and Nate just can’t stay away. He loves making her laugh… and blush.

Their attraction is irresistible, and between stolen kisses and wicked-hot nights, they form a deep bond that has them both yearning for more.

But when the chance of a lifetime comes knocking at his door, will Nate chase success even if it means losing Alice, or will he choose her?

Your Alluring Love is already the sixth book in ‘the Bennett Family Series’ by Layla Hagen. This is the first book I’ve read from this series and although there are a lot of characters, I didn’t feel I was missing important information. Your Alluring Love tells the sweet, sexy story of Alice and Nate, I love it!

“We’ve always had a push-and-pull dynamic, but this is something else entirely. And it feels dangerous. But then again, from carbs to sugar to Nate, I’ve always liked things that are bad for me.”

Alice Bennett is the proud owner of two popular restaurants, and has just opened a third one. Although she owns the places, Alice doesn’t feel too good to help in the kitchen when needed, and tries to divide her time between all three places. Since she’s so busy and all, Alice isn’t looking for a guy, but there is somebody on the back of her mind. For years she had (and still has) a big crush on Nate, the best friend of her oldest brother Sebastian. To her he’s the perfect guy, but she knows they won’t work.

“Always happy to be at your service.” His voice is low and husky. With every word, a warm breath lands on my cheek. It feels like velvet against my skin. I want to wrap it around myself and sleep cocooned in that velvety warmth.”

Nate Becker’s childhood wasn’t a very happy one. His parents where constantly fighting, so he kind of grew up in the Bennett household. Nowadays he’s a successful tv executive producer, traveling the world wherever his work brings him. As he has spent a lot of time with the Bennett’s he has seen Alice change form a young girl into a pretty woman, and he cares more for her then he likes to admit. But since she’s the younger sister of his best friend she’s strictly forbidden, or so he thinks.

“I almost kissed her on Saturday but stopped myself just in time. One kiss would never be enough, and seducing her is out of the question. She’s practically family, and I’m leaving.”

Alice and Nate have known each other for a long time, and always had feelings for each other. Well, Nate first saw Alice a sweet young girl, but that changed when she grew up. Alice had a big crush on Nate, but since he was a bit older than her, she thought she would never make a chance. Now they are both grownups and finally give into their feelings. It’s sweet, hot and sexy, and while they want more than just some secret moments, they know it can’t be more. Nate is about to leave the country for a new job and Alice, well, she’s afraid to get her heart broken because Nate means so much to her. Of course the couple gets their Happily Ever After, but it takes some work.

I love Your Alluring Love. I really like the author’s writing style and the way she makes her characters react to certain situations. Normally I don’t like overdramatic reactions, but since Alice knows what Nate wants out of life (she grew up with the guy!), I get her. Your Alluring Love has a great leading couple with lots of chemistry and a whole set of interesting secondary characters (who weren’t surprised by Nate and Alice at all). I’m definitely going to read to other books in the series.

“I love you. For years, I wasn’t feeling at home anywhere. Now I feel at home whenever you’re with me. You’re my home, Alice.”

I love Alice, Nate and their story. I give Your Alluring Love 5 stars. 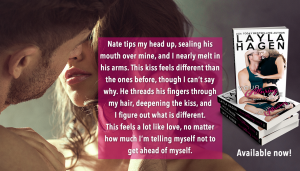 One Response to “Book review: Your Alluring Love ~ Layla Hagen”