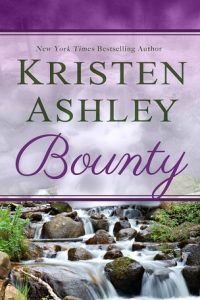 Justice Lonesome has enjoyed a life of bounty.

And when the foundation of her life is pulled out from under her, grieving, she goes to the mountains to find her oasis. She hits Carnal, Colorado and decides to stay.

Deke Hightower lost everything at the age of two. He lost it again at fifteen. His life has not been about bounty. It’s been about learning to live with less, because there’s no way to get more.

Deke’s also watched all his friends go down to the women who gave them what they needed. He wants that for himself. But he knows that search isn’t going to be easy because he’s a rider. His home is the road. That’s the only place he can breathe. And the woman who takes her place at his side has to do it sitting on the back of his bike.

When Deke meets Justice, he knows she’s not that woman. She’s cute. She’s sweet. And she’s into him, but she’s got it all and Deke knows he won’t fit into that. So he holds her at arm’s length. Establishes boundaries. And Justice will take it because she wants Deke any way he’ll let her have him.

But when Justice finds herself a pawn in a dangerous game, Deke makes a decision.
When he does, he has no idea he’s just opened himself up to bounty.

One of my favorite books series is by far the ‘Colorado Mountain series’ by Kristen Ashley. I’ve read every book of the series at least a dozen times. Bounty is the latest book in the series. Throughout the previous books, Deke Hightower was the silent lone wolf, present but a bit of a mystery. Bounty finally gives us his story, and it’s everything I hoped for and more.

Justice Lonesome is living the life. As the daughter of the famous rock star Johnny Lonesome, she has it all; seen and done everything imaginable, meeting all kinds of interesting people. But despite her luxurious lifestyle, she starts to feel like she’s missing something. After the death of her father, Justice decides to move to the small town of Carnal, to settle down and to build the peaceful life she wants so much; no more traveling, no more hectic lifestyle. Years ago, she met a man in a bar, the short talk they had changed her life, leading her to follow in her father’s footsteps. Meeting Deke again in Carnal refuels the dreams she had of him, the promise of what he can be to her.

“He was just Deke, the guy who was now going to make progress on my house so when the team could come and finish the job, they had less to finish. That was it. I walked to the door, opened it and moved through, these being my thoughts. These and the fact I was doing my best to tamp down the feeling that, ridiculously and way-too-keenly to be comprehensible or even logical, those thoughts hurt.”

Deke Hightower has grown up with his widowed mother, living the life of servants to a rich family. At age fifteen, Deke makes a mistake that causes him, and his mother, to be kicked out of their home and fall on financial hardships. The most important lesson Deke learned from this, is that rich people can’t be trusted and aren’t genuine. When Deke meets Justice for a second time, he sees a beautiful, rich woman—a woman way out of his league, a woman he doesn’t need or want. While he spends time working for Justice – renovating her house –he slowly begins to see the real Justice, and not the high-maintenance, rich woman he wrongly assumes she is.

“Deke knew he couldn’t have met Jus before, and not just because she was so damned friendly, if he had, she’d be all over that. Because he’d remember her, no way he’d forget meeting a woman like Jus, those eyes, that hair, those legs, that ass, all that fucking cute. No way in hell. Even knowing that, something in his gut told him he’d seen those eyes.”

The moment Justice sees Deke in Carnal, she remembers him as the man she met years ago, the man her instinct told was hers. To Justice’s disbelieve, he doesn’t seem to recognize her, something that hurts because Deke made such a big expression on her. Deke thinks he knows Justice from somewhere, but he can’t place her. Deke and Justice are attracted to each other, but they don’t act on it; Deke thinks he has nothing to offer a woman like Justice, and Justice is afraid that Deke really doesn’t remember her. But when something happens to Justice, all Deke can do is to unleash his inner protective Alpha, and to give in to the feelings he has for her.

The romance between Justice and Deke is slow and sweet, they form a friendship but an attack on Justice changes the dynamic between the couple. Bounty is a true Kristen Ashley book, written in the style I love. It contains all the elements of a classic KA book; a stubborn Alpha with issues, a strong heroine you want as a friend, a great cast of secondary characters, and some villains. It was good to see the couples from the previous ‘Colorado Mountain’ books again, to see bits and pieces of their lives.

“I could just say it, right out, all for him. For Deke. “Yeah, baby, I love you.” I watched that settle in his face, and doing it, I watched the miracle of this place that gave things like Deke to me and things like me to Deke at work. This latest miracle being watching the edges life had cut into his face smooth out, not from sleep, not from sex. All from me.”

I love Bounty, plain and simple, Deke is one of my favorite KA men. I give this story 5 stars.

~~ Bounty was provided in exchange for an honest review ~~

Deke’s voice carved into the perverse, bitter sick my brother and his mother stirred up in me and I lifted my gaze, twisted my neck and looked to his face.

He was not close.

But he was concerned.

And that concern undid me.

I turned fully to him, dropped my head and fell forward.

He was not near and then he was, right there for me to collide with as everything pressed into me. So much, I couldn’t hold it back, and the tears came.

He wrapped his arms around me as he stepped farther into me so he could hold me close.

That was when I started sobbing. My body shaking with it, automatically burrowing into his heat, his solidity, his bulk, all Deke.

“I miss him,” I whispered into Deke’s chest through a hitch.

The words with that hitch barely sounded before I felt Deke’s hand glide up my spine and tangle in my hair.

“Get it out, Jussy,” he murmured, his words stirring the strands at the top of my head so I knew he was bent to me.

“My brother’s a p-p-piece of shit,” I pushed out through the tears.

Deke’s arm around me got tighter and the tips of fingers started stroking the side of my ribs.

Even this did not make me feel better. In fact this—all that was Deke enveloping all that was me—made it better at the same time so much worse.

“He’s contesting the…the will,” I shared.

It came to me slowly that I was pressed hard to him and had my hands clenched into his tee at the back. I felt the damp material against my cheek and knew how many tears had leaked and that Deke took them from me.

I also knew he was being cool, a nice guy, because that was who he was.

But I couldn’t let this go on.

So I pulled my shit together, unclenched my hands and smoothed the shirt before I dropped them to his waist and tipped my head back.

Lamentably, he took my cue and let me go.

Incredibly, he didn’t do this completely.

He put his hands on either side of my neck and bent close so his face was a couple of inches from mine.

“Think, from what you’ve told me, you get that times get bad. Hope, Jussy, you also get that those times pass. Whatever’s happening, this will pass.”

I nodded because that was all I could do.

“Sorry, I…well, your shirt’s all wet,” I said, taking one hand from him to wipe my face.

His fingers curled around my neck gave me a gentle squeeze.

I gave him another nod anyway.

His eyes moved over my face and I knew he knew that nod was an inaudible lie but he didn’t call me on it.

He just said quietly, “Good,” gave me another squeeze and dropped his left hand.

But with his right, he lifted it up and I held my breath because I thought he was going to touch my face, dry a tear, something.

Instead, he raised it to the top of my head and tousled my hair before he gave me another close look, turned and walked away.

Shit, Deke comforted me then tousled my hair like I was his little sister.

But it was kind and it was sweet and it came from Deke.

So as was becoming my lot, I’d take it.