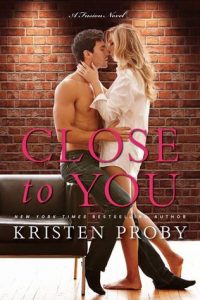 Camilla, “Cami,” LaRue was five-years-old when she first fell in love with Landon Palazzo. Everyone told her the puppy love would fade—they clearly never met Landon. When he left after graduation without a backward glance, she was heartbroken. But Cami grew up, moved on, and became part-owner of wildly popular restaurant Seduction. She has everything she could want...or so she thinks.

After spending the last twelve years as a Navy fighter pilot, Landon returns to Portland to take over the family construction business. When he catches a glimpse of little Cami LaRue, he realizes she’s not so little any more. He always had a soft spot for his little sister’s best friend, but nothing is soft now when he’s around the gorgeous restauranteur.

Landon isn’t going to pass up the chance to make the girl-next-door his. She’s never been one for romance, but he’s just the one to change her mind. Will seduction be just the name of her restaurant or will Cami let him get close enough to fulfill all her fantasies?

“You’ve known him your whole life. It’s not like he’s new,” I remind myself in the mirror. “You’re just going over to say hi. It’s no big deal.”

Cami is single and happily working with her best friends as a part-owner of Seduction. For as long as she can remember she’s been in love with Landon, the older brother of her best friend Mia. Even though she dated other men, and even married one, Landon is the man she keeps thinking about. This was part of the reason her marriage with Brian ended in a divorce, she felt it wasn’t fair not to be able to give her husband her everything. With the return of Landon to the United States, all of Cami’s dreams and desires about him resurface.

“I never saw him as a brother, but I did see him as a protector, a friend, and in my girlish fantasies, my prince charming. He’s no prince, but he can be charming.”

Landon loved his job as a Navy pilot, but an accident has stopped his career of 12 years, making him return to the United States. Returning home means spending time with his beloved family again, but also seeing Cami again. For years he had a little crush on her, but due to their age difference and the fact she is his sister’s best friend, he stayed away. But now both of them are grown-ups and single, and Landon finally can go after Cami.

Since they have known each other for a long time, Cami and Landon are at ease around one another. After a bit of a confusing visit, they start to spend a lot of time together, as friends and on the work floor. But with two people attracted to each other, sparks soon begin to fly. The couple take things slowly, not wanting to ruin the friendship they have. Landon knows Cami is it for him, but Cami needs some reassurance before she can see a future for them as a couple. Together they are sweet and evenly matched.

I know Kristen Proby for her sweet books without over-the-top situations, crazy twists and too much angst. Close to You is no exception. Landon and Cami talk to each other, behave like normal adults and are people you want as friends. Normally in books the ex-partner is the villain, but Cami and her ex-husband are an exception. After the hurt of their divorce was over, they became good friends again, it’s refreshing to read. Is Close to You predictable? The answer is yes, but it’s well written and very enjoyable. I will definitely pick up the next book in the series, which will be Katrina’s book.

“He tips his forehead against mine. “I love you so much.” “I love you too, you beautiful pain in the ass.”

I’ve enjoyed reading Close to You, I give it 4 stars.

~~ Close to You was provided in exchange for an honest review ~~

“Are you packed?” my sister, Mia, asks through the phone. Her voice is husky with sleep, which makes sense since it’s the middle of the night back home in Portland, Oregon.

“I leave tomorrow, Mia. Of course I’m not packed.” She snickers. I just finished up my last debriefing meeting, my last day as an officer in the Navy. I grip the zipper of my flight uniform and sigh. “It’s not right.”

“I know,” she says quietly. “But you’re safe and whole, and you could be dead, Landon, so I’ll take it.”

I frown, staring at myself in the mirror as I unzip my uniform for the last time. I’ll never wear it again, never pilot a plane again.

What the fuck am I supposed to do now? The Navy gave me options, but if I can’t fly, there’s no sense in it. Flying isn’t just what I do, it’s who I am.

“I’m a pilot, Mia. This is what I love. It wasn’t supposed to end like this.”

“Am I?” I murmur, then shake my head and wince at the neck pain that still nags me from time to time. Ejecting from an F- 16 will cause a crick in the neck. And a loss of an inch in height that may never return, along with an entire Naval career.

Son of a bitch.

“This has been the longest four months of our lives, Landon. We’re all anxious to see you.”

“I’ll be home in a few days,” I reply as I pull a T- shirt over my head and throw the last of my belongings in a box that the Navy will have sent to me from Italy.

I loved being in Italy for the past few years, and God knows I didn’t plan to leave it like this.

But I am. Maybe Mia’s right; at least I’m alive and I can walk and live a normal life.

And that’s what hurts more than any injury from the crash.

“What time should I come get you from the airport?”

“No need,” I reply, regretting calling my sister and waking her up. I just didn’t know what else to do when I came in here and was faced with boxes and the end of a career I love. “I’ll get there.”

I force a grin and a nod, though she can’t see either. “Of course it is.”

We say our good- byes and I sit on the edge of the bed, scrub my hands over my face, and take a deep breath. I hope she’s right.