My life is a secret.
His life is dangerous.
We’re both stubborn, calculating, and controlling.

Mark Dixon doesn’t know what he’s getting into. He doesn’t know his games could cost us our lives. I have to do what is necessary to keep us alive, and that means guarding my heart.

But I know I’m defenseless against him, and in the end, he’ll force me to surrender.

Having read the ‘Belonging Duet’ by Corinne Michaels some time ago – and having enjoyed it – I didn’t hesitate to pick up Defenseless. Add a hot former SEAL, a stubborn CIA agent, and an intriguing plot, I knew this book wouldn’t disappoint me.

“Yes, Charleston, I want your help.” “Fuck you.” “Anytime, baby. All I need is a time and place.” “I would destroy you.” Her voice drops low and menacing. “I have no doubt. You’re one of those black widow type girls. A man-eater. But I’d gladly take the kill.”

Mark Dixon is a former SEAL on a mission. Years ago, an assignment he and his team were working on, went horribly wrong. Three men died and a fourth man was presumably death, but later found alive with the help of an undercover CIA agent. Nowadays, Mark and the other surviving team members work at Cole Security Services, led by their former team-leader Jackson. Besides their security gigs, they still work on finding the man and organization who killed off their friends. Ever since Mark has seen the undercover CIA agent, he knows he needs to get to know her better. She isn’t his normal type, but Charlie is too much of a temptation to resist.

“I’ve never seen anyone like her. I’ve never reacted to anyone like this before. I want her—any man would—but I want to own her. Every part of my body, especially one in particular, yearns for her. I want to see if her skin is as soft as it looks, if her hair feels like silk, and her voice—I’m done for.”

Charlie Erickson is the daughter of the former CIA-director; feminine, but badass at the same time. Having learned from the best, she’s excellent at her job, working for the CIA is all she ever wanted. After she fails – in the eyes of her superiors – with a deep undercover mission, she’s pulled off the case. Knowing she’s on to something big, she seeks the help of a SEAL she once met, Mark. Although she finds him annoying, she is also very attracted to him, but tries to fight it (but of course she doesn’t succeed).

“Instead of fighting him, I try to pretend being in his arms doesn’t feel good. I tell myself that he’s part of the mission, he’s a liability, but the warmth of his body blankets me and makes me want to stay here. I need to get out of his arms, but I can’t seem to get my body to cooperate. This is going to be a problem. A big one.”

Together Mark and Charlie are funny, evenly-matched, and they have great chemistry. Not wanting to fall in love with Mark, Charlie tries to put him off, but she fails miserably. Mark knows from the get-go he can built something real with Charlie, but he gives her time to get used to the idea. Besides getting to know each other, the couple is working side by side (and sometimes not) to find their mutual enemy. The problems Mark and Charlie encounter are not brought on by crazy ex-partners or stupid miscommunications. Their hitches are a lot more deadly and involve not just their lives, but also that of others.

Defenseless is a standalone telling the story of Mark and Charlie. Mark is introduced in a previous series by Corinne Michaels, the ‘Consolation Duet’. Although I haven’t read that series, I didn’t feel I was missing any background information. Will I read the Consolation Duet? Definitely! Besides the great main characters, I really like Mark’s friends/colleagues and Charlie’s brother. I’m secretly hoping the brother will be getting his own book.

“I take the black box. And for the first time, I don’t want to wait. I want my man. I lift the lid as two sighs come from the other side of the table. Mark doesn’t make a sound. He just winks as if he had no fears. Such an arrogant ass. My arrogant ass.”

I’ve enjoyed this book filled with funny banter, sexy times, and explosive actions. I give it 4 stars.

~~ Defenseless was provided in exchange for an honest review ~~

Read an excerpt of Defenseless here. 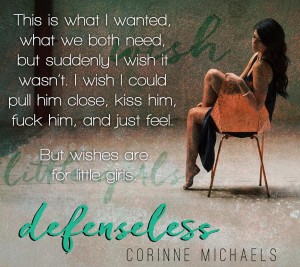