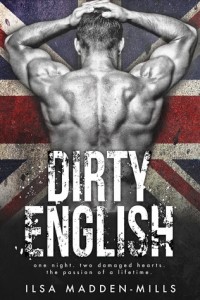 A scarred fighter. A girl with rules. One night of unbridled passion.

There are three things you need to know about Elizabeth Bennett: she’s smart as a whip, always in control, and lives by a set of carefully crafted rules. She’s learned the hard way that people you love the most always hurt you in the end.

But then she meets Declan Blay, the new neighbor at her apartment complex.

A tattooed British street fighter, he’s the campus bad boy she’s supposed to avoid, but when he saves her from a frat party gone bad, all her rules about sex and love fly out the window.

She gives him one night of unbridled passion, but he longs for more.

With only a cardboard-thin wall separating their bedrooms, he dreams of possessing the vulnerable girl next door forever.

One night. Two damaged hearts. The passion of a lifetime.

*a modern love story inspired by Pride and Prejudice*

Elizabeth Bennett doesn’t have an easy start in life. Growing up on the wrong side of the track, and with a mother who couldn’t care less, she is attending an expensive prep school on a scholarship. She is happy, has a lot of friends, and a great boyfriend – until the night of her prom changes everything. Vowing not to love again, she keeps men at arm’s length. She does have sex, but everything happens by her rules; how she wants it and with her being the initiator. When Elizabeth meets campus bad boy Declan ‘Dirty English’ Blay at a party, she starts doubting her own rules and wishes to be normal.

“He was exactly what I needed tonight, the complete opposite of Colby’s blond and preppy Ralph Lauren looks. Perhaps it was time to take my rules a step further, to prove myself I could be with whomever I wanted and keep control of the situation.”

Declan grows up in England, living with his twin brother Dax and their mother, while his father didn’t want to be a part of their lives. When his mother got very ill and died, Declan and Dax are shipped to the United States to live with a father who’d rather not have anything to do with them. Both Declan and Dax are smart boys who were expected to follow their father’s footsteps. But Declan’s interests lay elsewhere, he’s good at fighting and wants to make a full-time career out of it. While attending college, he’s fighting in an underground circuit, most of the time winning. After breaking up with his girlfriend, he doesn’t want to start something new, but meeting his awkward, beautiful neighbor/classmate changes everything.

“She fit the mold for the kind of girls I’d seen in my self-defense classes. Scared. Vulnerable. Hiding behind her pain. Elizabeth Bennet had been hurt in the past by someone, and whoever he was, I wanted to bury my fist in his face.”

From the moment Declan and Elizabeth are introduced to each other, they both feel a very strong attraction. But each has their own reasons for not wanting to get involved; Declan has just broken up with his girlfriend over the summer and wants to focus on his classes, but more importantly on the gym he just purchased. Elizabeth only ‘dates’ safe men, Declan is the complete opposite of what she considers safe. Declan knows what he wants and that’s Elizabeth – not just for one night or a fling, but for real love. Due to her past, Elizabeth has a hard time wrapping her head around the fact that her rules and believes are wrong, that a beautiful and dangerous man can be the one for her.

Reading the prologue made me feel so bad for Elizabeth. It is painful to read what was happening to her, but it also explained her way of thinking—how she became the young woman she is now. I understand her motives, but sometimes I wanted to shake her a little. Declan was the right man for her. Yes, he is good-looking, rich, popular, but he is still the right guy. I love to see that Elizabeth – with Declan’s unconditional love – finally understood her self-worth and embraced the future she could have with him. Besides the main characters, I really liked Blake and Shelley, Elizabeth’s best friends. I also hope that Dax, Declan’s twin brother, is getting his own story.

This is the first book I’ve read by Ilsa Madden-Mills, and it certainly won’t be the last, I really enjoyed the writing. I give this story 4.5 stars.