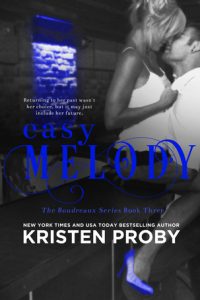 Callie Mills never intended to return to New Orleans and the life she left behind more than a decade ago. There was no need to open old wounds when she had the life she’d worked hard for in Denver. But when she’s fired from her awesome job in Colorado and her father dies, she has no choice but to return home to run the derelict bar left to her in the heart of the French Quarter. Callie must not only face bad memories but turn The Odyssey into something she can be proud of.

And who better to help bring in crowds of people than Declan Boudreaux?

Declan is a sought-after musician who knows he’s good at what he does and loves doing it. Known to pack the house, he also loves women and doesn’t expect to be knocked back a step by the beautiful new owner of The Odyssey. Callie is sharp, gorgeous and funny, and makes him yearn for something he never has before… Commitment.

But when Callie’s able to turn the business around with renovations, making it one of the hottest bars in the Quarter, will she sell out and leave her past behind once and for all, or will Declan be able to convince her that’s she’s where she needed to be all along…in his arms.

Kristen Proby is my go-to author whenever I need a sweet read without too much angst and over the top situations. Easy Melody, the third book in “The Boudreaux Series”, is a good addition to the series – a strong, independent leading lady, a swoon worthy Hero and a healthy dose of mutual attraction and sex. Add to that a big, meddlesome family and you have your recipe for a typical Proby book. It always cheers me up after a darker read and I love it.

Callie Mills just has inherited the Odyssey, her late father’s bar, when her boyfriend of two years breaks up with her. Having no place to go, she decides to stay in New Orleans and renovate her bar, hoping to sell it with a profit. Besides working with her now ex-boyfriend, managing his Denver nightclub, restoring old houses is a passion for Callie. Living with her best friend and co-worker Adam, she meets musician Declan, who performs weekly at the Odyssey. She falls fast and hard for him, but knowing his reputation and what she needs, she tries to keep it just physical.

“I drag my fingers down his cheek and watch his eyes go almost gold with heat. He isn’t the first man I’ve dated since moving back to New Orleans, but he’s the first that I’ve felt any kind of chemistry with. He’s the first who’s actually turned my head, made me smile. Made my body come to life.”

Declan Boudreaux is musician, he loves to preform, playing his music and being on stage. He enjoys women on a regular basis, but he always makes sure they know the score to avoid awkward situations. Declan comes from a rich family, but he likes to work hard, performing every evening at the bars and clubs in New Orleans and working together with other artists. Besides his music, he’s restoring an old mansion he bought, doing most of the work himself. From the moment Declan meets Callie, he feels himself drawn to her.

“Until you, and it’s confused the hell out of me. All I want is a chance to start this over with you. We did it all backwards, and that’s on me. I get it. But damn it, let me try it again, because if you don’t, it’ll be the biggest regret of my life.”

From the moment they meet each other, there’s an instant attraction between Callie and Declan. They easily fall into a routine, hot mind-blowing sex, trips, and Declan introduces Callie to his family. Warned by Adam, Callie tries to keep her emotions and feelings under control – she knows what she wants, and that’s not falling in love with another commitment-phobe. Declan knows he feels something different for Callie, something he hasn’t felt for another woman. Not being used to a relationship, he isn’t good at communicating his feelings – or communicating at all – putting his new relationship with Callie at risk.

Having read the previous books in “The Boudreaux Series”, I enjoyed seeing the characters and city of New Orleans again. I love the big Boudreaux family – how they support both Declan and Callie, and each other – and the way Easy Melody is written. Hints are being given for the next books in the series, and I can’t wait to read them.

“I need your friendship. Your patience. I need my family, even if they are a pain in my ass most of the time.” He smiles. “I need to protect you, keep you safe. And I know this is going to piss you off a little, but I need to take care of you.”

Easy Melody is a sweet and easy read, I’ve enjoyed it. Because of the predictability I give this story 4 stars.