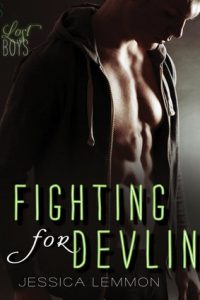 Devlin Calvary makes his own luck. Orphaned as a young child, he was taken in by a crew of bookies and gamblers—and they became his family. They’re the reason Dev’s running a trendy bistro, living in a high rise, and enjoying the good life with a string of women who never ask for too much. Until, one night, he finds out how much it hurts to trust the wrong people.

Rena Lewis sticks to the straight and narrow, determined not to slip up again . . . like the terrible night of partying four years ago that ended in tragedy. A waitress at Oak & Sage, she knows that sleeping with her boss is not a smart move. But when Dev shows up on her doorstep, beat up and clearly shaken, Rena’s not about to turn him down . . . or kick him out of bed.

Dev reawakens something primal within her—a need to go wild. And Rena soon finds out that the heart she’d sealed away years ago still has the power to fight for love.

Rena Lewis is a 22-year-old, recently laid off from a job she really enjoyed, she just started waitressing at the Oak & Sage restaurant. Rena is a self-proclaimed bad girl gone good. Sitting next to her dying boyfriend four years earlier in a car crash changed her. Took some community college courses, no dorm living, no wild parties. She hadn’t been with anybody since out of guilt and remorse. A lonely life, just existing.

“I’d been without someone to touch, to hug, to kiss for four long years. Being alone was … well, lonely.”

“Really pretty. The kind of pretty reserved for guys not like me. Which made her as far from the opposite of my type as they came.”

The story isn’t a new one. I have read this story many times before. The good girl feels an attraction to the bad boy, the bad boy is in lust with the good girl. What I enjoyed in this story is the dual POV. We don’t only see the inner thoughts of Rena, we also get a look into Devlin’s mind. I also liked the supporting characters. Even the bookie, Sonny, was a very likeable guy in the end.

Rena is attracted to Devlin early on in the book. I liked the fact that Devlin didn’t fall head over heels for her. He just saw her as an employee. A really pretty one, but still a girl that works for him. After he ends up wounded at her place, he starts thinking about her all the time. He doesn’t ‘like’ it, because she’s not his type. The couple dances around each other, but can’t deny the mutual attraction.

This is my first book by Jessica Lemmon, and I enjoyed it. I liked the main couple as well as the side characters. I can’t wait to read further installments in this series. I give this story 3.5 stars.

~~  Fighting for Devlin provided by Netgalley in exchange for an honest review.  ~~