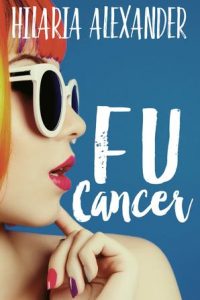 Lucy has always been a good girl. The most hardcore thing she's done in her life was falling for a divorced man ten years her senior.

But he was the love of her life and she married him. When her Peter Pan of a husband decided to divorce her, she thought it was her chance to start anew. That was until she was diagnosed with breast cancer. Besides looking like Britney circa 2007, she is taking it well, real well. You might see her walk around the hospital during chemo sessions with bright colored wigs and outrageous t-shirts that seem to shock the most conservative employees. One of them reads FU CANCER.

FU Cancer is the first book I’ve read by Hilaria Alexander. Beforehand I wondered myself how romance and this horrible illness would go together without a cryfest. Surprisingly, FU Cancer isn’t a sad and painful story. Lucy – the main character – doesn’t break after her diagnosis, but takes on the fight full of life, funny t-shirts and other, colorful items. I adore this story.

Lucy is a single mother to her two boys, Carter and Noah. Growing up with her sister and single mother, all she wanted was to have a traditional family; a loving husband and children. When she meets a man ten years her senior in her mid-twenties, a man who shares that same dream, Lucy can have it all. To her disbelief, after eight years together Patrick decides family life isn’t for him, leaving her and the boys behind to manage his restaurants and dating younger women. A routine visit with the family doctor turns her life upside down for a second time, a referral to an oncologist with a horrible outcome; stage III breast cancer.

“I had recognized it before I looked up. It was the hot doctor. Dr. Fuck-me-now. Ohmygod, did I say that out loud? He was grinning at me, and I felt my face suddenly turn red. I wanted to die. Fuck you, chemo brain. Making me run my mouth like that. And now I was alone.”

As soon as Lucy learns about her diagnosis, she in for the fight of her life, although a little bitter she knows she has so much to live for, most importantly her two young sons. During her numerous hospital visits, Lucy meets Brandon, one of the doctors in the oncology unit. And even though this isn’t exactly the right time to start a romantic relation, the couple can’t stay away from each other. Together they are sweet, funny and have great chemistry, and soon Lucy and Brandon both know this isn’t just a fling, it’s much more.

“I caught a glimpse of her left hand and noticed she wasn’t wearing a ring. It broke my heart that she was embarking on one of the most difficult journeys of her life. I wanted to help her. I almost wished she was my patient. And then I realized it was better if she wasn’t.”

Although FU Cancer is told in a double POV, this story is mostly Lucy’s tale. Her fight with a terrible disease, her coping with losing her hair and her breasts, her hope and will to survive. Brandon has his own issues to deal with, which cause for some angst-y moments. But knowing how they are as a couple, how they feel about each other, ending up together is a given fact.

Cancer is a horrible disease, which takes the health and lives of so many women. I love the realness described in FU Cancer, and the Happily Ever After Lucy and Brandon got, because that’s also a possible outcome with cancer. I give this story 4.5 stars.