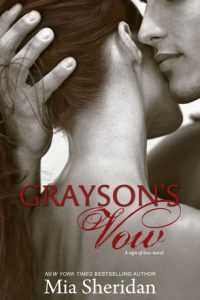 Kira Dallaire is desperate.
Some challenges in life seem too hard to overcome. With little money, and even fewer options, the quick-witted and vibrant twenty-two-year-old needs to reinvent herself. Known for her generous heart and impulsive personality, she devises a survival plan, possibly her most outrageous idea yet.

Grayson Hawthorn is losing hope.
Some obstacles in life seem too hard to overcome. Betrayal definitely being one of them. With limited capital, and dwindling resources, he is attempting to resurrect his failing family vineyard, a self-imposed vow seemingly destined to fail. That is until a young woman enters his office with an outlandish, unexpected proposition impossible to refuse.
What begins as a temporary business arrangement, soon evolves into more as vivacious, spirited Kira challenges detached, arrogant Grayson to want more from life. To want more for himself. But as their wills clash and fiery passion ignites, they'll realize that sometimes the past creates walls too difficult to climb, and that lies and deception rarely precede a happily every after.

As Kira and Grayson race toward their destiny, they will discover that some vows are meant to be broken, and others are worth risking everything for . . . even your very own heart.

THIS IS A STANDALONE SIGN OF LOVE NOVEL, INSPIRED BY LIBRA. New Adult Contemporary Romance: Due to strong language and sexual content, this book is not intended for readers under the age of 18.

Kira Dallaire is a sweet young woman who’s misunderstood by the world. Due to circumstances beyond her control, people see her as the rich party-girl doing drugs, spending a lot of money, and nothing else. But she’s so much more than this persona, she’s kind, caring, and looking out for people less fortunate than her. Desperate to escape her father’s clutches, she sees no other way then to offer herself up to an arranged marriage to a stranger. A stranger who doesn’t find her attractive, or so he makes himself believe, but who needs her money to save his family business. To Kira, Grayson Hawthorn is the most breathtaking man she has ever met. Despite his cold treatment of her, she finds herself very attracted to him, which complicates her plans and dreams.

“The more condescension he’d shown me, that faint derision never leaving his expression, the more nervous and ruffled and unsure I’d become. I hated that feeling. I’d known it my whole life. Being scorned felt heart achingly familiar.”

Grayson has grown up as the unwanted son of his father and step-mother, born from his father’s affair and dumped at his doorstep when he was two years old. His father has had the cruelest parenting techniques, not only for Grayson but also for his legitimate son. Grayson has learned from an early age that he wasn’t good enough, wasn’t worthy enough. He’s running the vineyard his father left him in his will, doing his very best to turn the failing business around. Desperate for money, he has no other option than to take the deal Kira is offering him.

“I clenched my jaw against the way those words had stabbed, implying more to me than just my financial value. Reminding me I’d never been worth much.”

The beginning of Kira and Grayson’s relationship is based on a business arrangement. Grayson needs the money to save his business, Kira needs the money to get away from her father and support her charity. Kira kindly calls Grayson “The Dragon” because of his grumpy nature and cold demeanor. Both feel attracted to each other and they have incredible chemistry—in- and outside the bedroom—but their past has taught them to be careful, to guard their hearts. Despite her experience with her father and her ex-fiancé, it’s Kira who opens up, who lives in the now and wants to let go of the past. Grayson wants to, but the scares from his childhood run deep, very deep. I was happy when he finally understood his worth and embraced the love he and Kira shared.

Grayson’s vow is written in the beautiful style of Mia Sheridan, and I made me feel much of what Kira and Grayson were experiencing—their pain, their joy, their love. What they both have had to go through was sad and heartbreaking; it made their Happily Ever After even sweeter. Also, I love the supporting characters in this story; they each play their role perfectly and add depth and diversity to the story. Both Kira and Grayson’s fathers are true villains, each in their own way.

“She owned my heart and soul – I would be hers until I drew my final breath. And I was ready now I was ready to surrender my all, every last bit, come what may.“

I have loved Mia Sheridan’s other books, and when I heard about this book, I was very excited. This book, with the way it’s written, has done my excitement justice. I love the tale that’s being told, the characters and my feelings were all over the place in a good way. I give this story 5 beautiful stars!