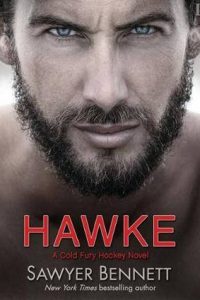 The Carolina Cold Fury hockey team proves that love is a power play. As Sawyer Bennett’s New York Times bestselling series continues, the league’s most notorious party animal gets blindsided by the one that got away.

Off the ice, elite defenseman Hawke Therrien enjoys his fair share of booze and good times. And why shouldn’t he? He’s worked his way up from the minor leagues and made himself a star. The only thing Hawke misses from that life is the pierced, tattooed free spirit who broke his heart without so much as an explanation. She’s almost unrecognizable when she walks back into his life seven years later—except for the look in her eyes that feels like a punch to the gut.

Vale Campbell isn’t the same girl she was at twenty. As crazy as she was about Hawke, her reckless behavior and out-of-control drinking were starting to scare her. She had to clean up her act, and that would never happen with Hawke around. Cutting him loose was the hardest thing Vale ever had to do—until now. Because she’s still crazy about Hawke. And if he could ever learn to forgive her, they just might have a future together.

Hawke Therrien is an ice hockey player who is leading the life people expect him to live; play hockey and have good times off the field. Although he has moved on from the one woman he loved – after she left him without an explanation – he still thinks about her from time to time. Seeing her after seven years unexpectedly is an unwelcome surprise, but soon his curiosity takes over. He wants to know all about the woman his girlfriend has grown into, and he wants answers.

“Body is still slammin’. Noticed that when she stood up. And those eyes… I could see their crystal clarity from up here. Sexy as hell, but when they looked at me, not an ounce of warm recognition in them. Christ…”

Vale Campbell has just relocated to take an assistant athletic trainer position with the Cold Fury. Due to her work and her father’s knowledge of ice hockey she knows her former boyfriend Hawke plays for the team. Though she really loved him, she had to break up with him all those years ago, in order to sort out her life. Working and interacting with Hawke makes Vale realize they have unfinished business, that the feelings she had for him are still there.

“He’s perfection, and I while I want to tear my eyes away, I just can’t. Besides, he hasn’t spared me a glance, and while we were over years ago, I can’t say it’s a chore staring at him like this. What woman in her right mind wouldn’t stare at that?”

Young Hawke and Vale were crazy in love; all was about each other, partying and the fun things in life. Until one moment where Vale sees it has become too much, too consuming. She reacts the only way she can think of, breaking things off with Hawke. Both have lived lives, but when they meet again it doesn’t take long before old sparks begin to fly again.

Hawke is the fifth book in the ‘Cold Fury Hockey series’, therefore the characters from the previous books make an appearance. I haven’t read the other books, but I didn’t feel like I was missing important information, however it did peak my interest. Although I did like this story, I wish it was more. Hawke and Vale reunite after a seven year break, and besides some misunderstanding and hurt feelings along the way it’s a smooth ride.

“I mean, how could I say no… when it gives me full permission to be the nagging wife?” And it hits me all of a sudden. She said yes. She’s going to marry me. Be mine forever. And ever.”

I give the story of Hawke and Vale 3.5 stars.

~~ Hawke was provided in exchange for an honest review ~~