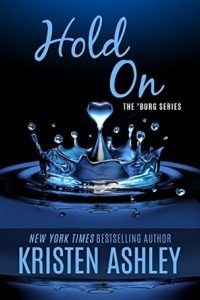 Since she was young, Cher Rivers knew she was not the kind of girl who got what she wanted. A girl who could hope. A girl who could dream. She knew a happily ever after just wasn’t in the cards for her. In love for years with last bastion of the ’Burg’s eligible bachelors, Garrett Merrick, Cher worked hard at making him laugh. Being one of the guys. Having him in her life the only way she could. All this knowing he was in love with another woman.

The Merrick Family is known for loving deep. So when Cecelia Merrick was murdered, it marked the Merrick family in a way none of them recovered. Both Cecelia’s children found love. Both turned their backs on it. But Garrett “Merry” Merrick knew in his soul the woman he divorced years ago was the one for him. Until the night when Cher took Garrett’s back and things changed. The Merrick family loves deep but they also protect fiercely. And with his eyes finally open, he can see the woman who truly is for him and Garrett goes after her. The problem is she’s surrounded by danger. So he has to win her at the same time keep her safe.

Cher Rivers has been through a lot in her life and does what it takes to take care of her son, Ethan. She isn’t shy, wears what she wants to wear, and knows it looks good on her. She’s not ashamed of the jobs she took to support herself and her son when his father walked out of their lives. After she dated a serial killer (this story is told in the first book of the series, For You), Cher relocated herself and her boy to The ‘Burg and started to work at the J&J’s Saloon as a bartender. For years she’s been in love with Garrett ‘Merry’ Merrick, but he only sees her as one of the boys. She serves him his drinks, laughs about his jokes, and watches him take home other women. Her past has taught her never to hope, so she contents herself with the friendship they share.

Merry is a police officer who has lost his mother when she was murdered, changing him and his family forever. He never truly dealt with it, costing him his marriage and the love of what he thought was a good woman. For years now he has casual relationships with women—even with his now ex-wife. All his life, he has been told Merrick’s only love one special person, and with his marriage gone, he believes he doesn’t deserve another chance. However, things starting to change when Merry witnesses a conversation between Cher and the wife of Ethan’s father.

“It was also because, when he was low, she took his back. So now that she had the possibility of trouble, he was going to take hers. Is she wanted him to or not.”

Cher and Merry have known each other for a couple of years now, they are friends who help out one other when needed, and run in the same circle of friends. After one night full of hot sex the dynamic in the friendship begins to change. Cher desperately wants to keep things as they were, she doesn’t deserve a man like Merry, or so she thinks. Merry also wants to keep things normal, as he’s still messed up from his past; the murder of his mother and his marriage to his now ex-wife. After dancing around each other for a bit, they finally give their relationship a real chance.

The story of Cher and Merry is the sixth book in The Burg series, which means you know the town and the people you meet already, if you’ve read the other books. Just like in a lot of Kristen Ashley’s books, you feel like you came back home after a long vacation, everybody is still there and nothing changed. The story being told isn’t new, but it’s written in the distinguishable style of Kristen Ashley—beautiful and real, full of real emotions and descriptions. I’ve really enjoyed to see the people from the previous books again, to see glimpses of their lives and relationships. And the epilogue. That epilogue made me incredible happy, I saw the people build families whose roads to true love I adored and the promise of new beautiful stories to come.

“It happens, he repeated. For people like us, baby. It happens, eventually. Just as long as we hold on.”

Sitting down on the couch to start reading Hold On, my heart made a little happy dance. I was excited for this book since I read the blurb, and this story did my excitement justice. I loved the story, the leading characters, and I adored Cher’s son Ethan. I give this 5 beautiful stars.