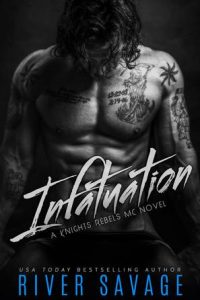 Beau McIntyre is driven by a past smothered in blood and covered in bruises. Though tragic, it's help shape his future and define the man he's become.

Day in and day out, he's reminded of his failures in the faces of the women he saves. But what happens when one girl threatens to blow all of that apart? Will Beau lose his grip on the controlled lifestyle he abides by?

Mackenzie Moore is running from a past she needs to forget. A past that has molded her into a woman living in fear. One fateful night, her carefully constructed world is pulled down around her, forcing her to make a decision she's not sure she can live with.

Turning to the Knights Rebels MC for help is the last thing she wants, but everything she needs.

Can Beau save her once again, or is what she running to far worse than what she’s running from?

Mackenzie ‘Kenzie’ Morre is recovering from a violent marriage – her ex-husband abused her in all ways imaginable, never being punished because of his connections. In the last 18 months, she’s gotten herself back together, but still has to look over her shoulders, afraid of being found. Looking back on her marriage, Mackenzie knows what was wrong – and more important – where it went wrong. She vows never to let herself be brought under the control of a man again. When her past catches up with her, Mackenzie turns to the man who promised her she would be save. The same man who got her away in the first place—Beau McIntyre.

“He’s changed a lot since I saw him last. Not that I really knew him. It was only a brief time we spent together, but it didn’t matter. As cliché as it might sound, we had a connection. One that brought us together.”

Beau has no family left in the world, his parents are dead and his sister, Missy, has been killed by her violent partner. To this day, he feels responsible for Missy’s death—he should have done his duty as a brother and protected her. In honor of her memory, Beau rescues women from abusive relationships and helps them move on to better lives, together with some of his brothers from the Knights Rebels MC. It is on one of these rescue trips that Beau meets Mackenzie. Although she’s wounded and in very bad shape, she awakens unknown feelings in him.

“The emotion she awakens in me causes my words to fail. But it doesn’t matter, not right now. Words are not needed in this moment. I look at her, from her eyes to her hand still resting on my skin and then back up again. Neither one of us speaks or attempts to break the connection.”

Beau is a dominant man who know what he wants and how he wants it. Not surprisingly, this dominance follows him to the bedroom where he needs to have total control. Although he has strong feelings for Mackenzie, he is well aware his dominant tendencies could be too much for her given her history with an abusive husband. Therefore, he wants to be honorable and tries to stay away from her. It doesn’t take long for Mackenzie to develop feelings for Beau, feelings she doesn’t want to act upon given his dominant presence. After her disastrous marriage ended, she promised herself not to fall under the spell of a controlling man again.

While their attraction for each other is very clear to all around them, Beau and Mackenzie fight their feelings for quite a while. When Mackenzie finally comes clean about what truly brought her back to Beau, the couple can finally start working on a relationship.

I felt so bad for Mackenzie, reading the parts about her and her horrible ex-husband were painful and heartbreaking. I admire her for getting herself back together, she is a true survivor and one strong lady. There are moments I wanted to punch Beau in the face, he keeps thinking he’s being honorable by staying away from Mackenzie, while all he did was causing more hurt. I have been incredibly happy when they finally talked and all was out in the open.

“It is etched into my mind and will be the moment we draw all comparisons from. We will revisit it, try to replicate it, but nothing will ever compare. Because it is the first time I gave myself entirely to Beau. He owns me, and for the first time in my life, I realize I don’t want to be owned by anyone other than him ever again.”

I’ve really enjoyed to see the couples from the previous books again. I’m also looking forward to the books planned for the future; Brooks & Kelly and Bell’s sister Paige, I can’t wait for their stories to be told!

I give Infatuation 4 stars.