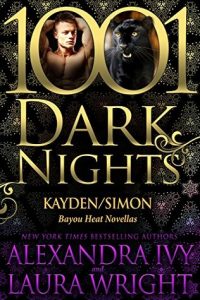 ENEMY TO LOVER
Kayden is obsessed with revenge after his parents disappeared when he was just a cub. Now the gorgeous Hunter has discovered the man responsible for betraying them - Joshua Ford - and it’s time for payback. Beginning with the kidnapping of Joshua’s daughter, Bianca. But last thing he expects is to be confronted with the horrifying realization that Bianca is his mate. Will he put revenge before his chance for eternal happiness?

BEAUTY AND THE BEAST
Sexy male model, Simon refuses to give up his exciting life in New York City to return to the slow heat of the Wildlands. For a decade, many pantera have tried to capture the rogue Diplomat and bring him home, but all have failed. Now it’s Tryst’s turn. The hard, brilliant, and gorgeous, Hunter is the ultimate tracker. But can the admitted beast-girl of the Wildlands capture her prey without losing her heart in the process?

The novella Kayden/Simon – part of ‘the 1001 Dark Nights series’ – are the first stories I’ve read by Alexandra Ivy and Laura Wright. Set in the world of ‘the Bayou Heat series’, the separate stories tell the tales of Kayden and Simon; two men who meet their women in a very different way.

Kayden is looking for answers and revenge. Learning the death of his parents wasn’t an accident, he’s determined to find the man responsible and make him pay by taking something precious; his daughter. Bianca has lead a sheltered life, safely tugged away at her father’s house. Due to her illness she never went to school like normal children, always was alone at the house or at medical facilities surrounded by adults. The moment Kayden and Bianca meet in a less then friendly situation, they both feel a pull towards each other.

“We’re taking a trip together.” “What?” She took a hasty step back. “I’m not going anywhere with you.” His smile widened, revealing pearly white teeth. “It wasn’t an invitation.”

While spending time together, Kayden and Bianca learn not all is what it seems, lies have been told and are hurt. Especially Bianca has a hard time coming to terms with her past, but with the loving help and support of Kayden she learns to embrace her inner cat.

“An exquisite, rare beauty who has been hidden away. Just waiting for me to rescue her.” “My very own Prince Charming?” “More like the Big Bad Wolf.” His smile was wicked. “Or in this case, the big bad kitty.”

Simon hasn’t been to the Wildlands in a long time. Due to the messed-up relation he has with his parents, Simon has turned his back on his beast, on shifter society and is on his own. Being a world famous model he has the means to live his life by his own rules; trust no one, relay on no one. Tryst is very much in touch with her inner cat, she practically lives 24/7 as a cat. As a hunter it’s her task to bring back Simon in the fold, and since Tryst is good at her job, it doesn’t take long before she finds Simon. While they have a not so friendly opinion of the other one, both can’t deny the sparks between them.

“Who are you?” he demanded, low and dangerous, his nostrils flaring as he breathed her in. “Your assistant, hot stuff.” Every word dripped with disgust and sarcasm. “Or should I call you, Mr.…I’m sorry, do you even have a last name? Is that a model thing?”

While Simon hasn’t been in touch with his inner beast for a long, long time, he just knows Tryst is his mate, just like Tryst knows he’s hers. Due to his horrible parents, Simon doesn’t trust easily, something Tryst helps him to overcome. Together they’re hot and explosive.

“I see you, Simon. Do you understand me? I see you.” “I know you do,” he said on a rush of breath. Again, her heart squeezed. “Really?” His eyes locked with hers. They were stormy blue, but it was a storm that raged from love.”

I really like the stories of Simon, Kayden and their women. But like a lot of short novella’s, the characters and the story-development feels a little flat. Everything falls smoothly and nicely into place, without too much trouble. Personally I think both couples deserve a longer story, to do their personalities and relationships more justice. This being my first reads by these authors, I like their writing style, I’ll definitely pick up their other works.

Although I’ve enjoyed reading Kayden/Simon, it was on the short side and therefore a little predictable. I give these stories 3.5 stars.

~~ Kayden/Simon was provided in exchange for an honest review ~~